Supervisor putting me to impossible deadline, ignoring feasibility warnings, and failing to deal with the fallout

tl;dr: My supervisor chose to try to deliver a new feature within an unfeasible org-wide deadline, put me on development for it (despite my early warnings), made me feel like I'm at fault for it not being ready, and gave me no course of action regarding what to do about it moving forward.

Our work nowadays is primarily adding more features for end-users. It is the responsibility of each team's supervisors to decide which features go into which releases, based on how much work they are estimated to be and how much time we have before the deadline to complete that work.

Chris recently put me onto one of the smaller feature proposals with a very tight deadline. I came up with a gameplan, but determined that we did not have enough time to be ready for the deadline. I relayed this to him in our next weekly one-on-one meeting, and he all but disregarded it. He sort of stammered, trailed off, said something like "we'll see where you're at later in the week." I offered to work late if necessary. He sort of shrugged and said he didn't think that would be necessary. So I just went back to work.

Come Friday, I had made even more progress than I anticipated, but it was still at least a week away from being even close to shippable. I gave him a status update in our team meeting. Afterwards, he pulled down my feature branch and spent the rest of the day testing it out and messaging me every time he found anything at all wrong with it. I started trying to fix things, but quickly grew stressed and reminded him that it's a complex feature and needs more time. He said, "We are out of time." I asked, in the most earnest, non-confrontational way possible, what exactly he wanted me to do at this point. No response. I offered to work a day over the weekend. He said "sounds good."

This is the second time I've been solo up against a really tight deadline like this, but I'll admit to being at least partially at fault the first time. I was not transparent with management about whether or not I was going to get that feature done. I didn't want to have to tell them that I didn't think I could complete the task. After we had a really close call, Chris in our postmortem told me that in the future, if I ever feel like a feature is not going to be ready in time, I should be forward about it and let them know so they have time to coordinate a new schedule for the feature. That's exactly what I tried to do here, and I feel like I've been totally ignored.

I love my job; the work that I get to do; the engineers I get to work with; the satisfaction when I see end users thrilled at the stuff I've worked on. But Chris has been truly difficult to deal with. He was an engineer who became a supervisor, and severely lacking in management skills, which is usually not a problem since there's so much feature overlap and collaboration between teams in the org. But situations like this really highlight his shortcomings.

I am the farthest thing from someone who likes to stir up drama, especially at the workplace. I try to solve interpersonal situations on my own when possible, and deal with them or ignore them when not. But for the first time ever, I've been dreading going into work, and I feel like that's a sign that I should do something about this. Chris' boss, Dave, is an excellent supervisor and very personable. I feel like I should try to have a conversation with him about this "collision course" I've felt like I've been on all week, doing everything I possibly can to deal with a situation and still knowing that it won't be sufficient. But I harbor no ill-will towards Chris. He is a nice guy and a skilled engineer. I don't want him to get demoted or take a pay cut.

Is talking to Dave the best course of action? If so, how can I choose my words to make that conversation meaningful and direct without completely throwing Chris under the bus? If not, what should I do instead?

By the way you can skip to the end for the advice bit, the rest is just building up to it. Just to save you some time there.

Sounds like Chris has to have a postmortem of his own. Let me start by saying that it looks like you did everything almost correctly. You can't be blamed for not being absolutely correct, because being defensive and planning your CYA ahead is not a natural habit, but something people pick up with time.

This is as far as Point 1 goes. You were correct about the deadline and communicated that on time. That's all that can be expected of you. In the future if you ever get the feeling you might be thrown under the bus, you can create a paper trail by emailing your meeting notes to the participants, to keep a reference of what was discussed. But it doesn't look like this is the case here, I think Chris was a bit too eager to please in the same way you were. Probably because of Point 3.

Let's talk about points 2 and 5. I'll start with the interpersonal conflict beause it's the most serious. You realize that wishing things away will not serve you very well. Do not let it slide - actively work on it. Most people don't even realize they're doing that, so you already have a head start.

As for offering to work on weekends, well, don't do that. Allow me to be cheeky for a moment: 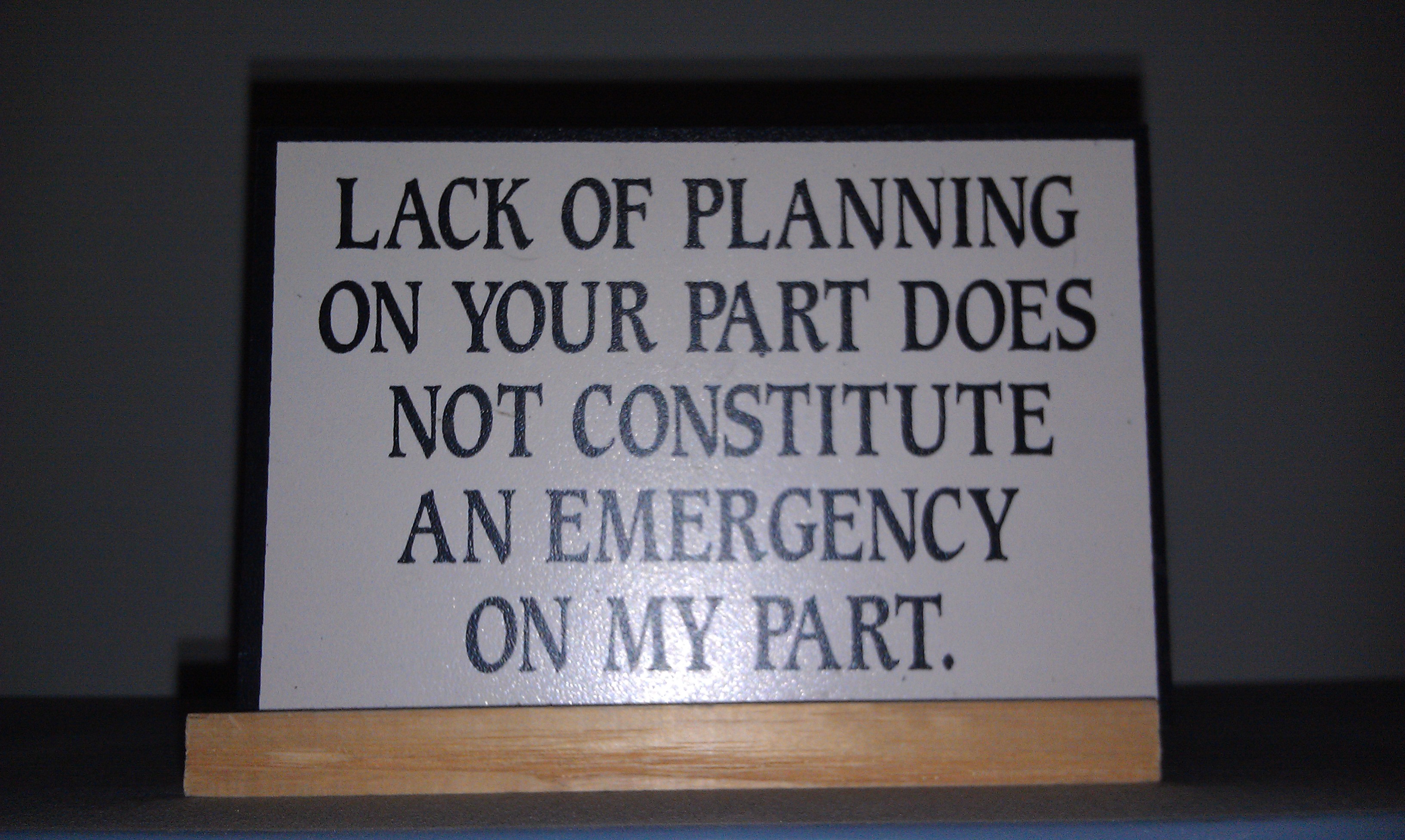 And that's really all there is to it. There will be times when you will decide it has to be done, and that's OK, but you're too trigger happy with it. Still eager to please, perhaps. Once you've thought about doing overtime it's difficult not to offer it, because you think it's somehow expected of you. That was my problem, at least. I took care of it. I've done overtime since, but only in exceptional circumstances, and only when I felt I freely consented to it.

Enough Agony Aunt, let's see what we can do about Chris. I recommend not going to Dave because you'll be going behind Chris' back, no matter your good intentions. You'll be happy to know this interpersonal problem can be solved between you two at least.

Chris looks like someone who's in over his head, and will now get a bollocking for it. He's probably a bit worried. He's not gonna lose his job or anything, but still, not a good place to be come Monday morning. Things to talk about in your next post-mortem:

The last one is key, the others self-explanatory. You had a post-mortem before where he asked you to flag any problems in the future. This is by the book. You've done that, but it wasn't taken into consideration - so what's the point? He has to start trusting your input more.

As a developer, you are responsible for implementing the features that you have been asked to, and keeping your managers informed on progress made and any problems you need their help with. It is the role of the supervisor or project manager to decide priorities and allocate work to releases.

You have done the right thing. Continue to keep your manager informed about progress on the feature and leave it to them to decide what to do about that. That could mean asking another developer to assist you in finishing the feature. More likely, they will just delay the feature until the following release.

I would not recommend complaining about your manager to his manager and I see no need for you to put in unpaid overtime.

Make sure you inform your superior(s) (potentially all the way up to highest management / owners if nobody listens) about every relevant factor that threatens the deadline.

If possible offer solutions for them to consider how to make the deadline (more developers,external code etc.).

Keep a paper trail of every communication and always clearly voice your concerns if you think the deadline won't be met.

Keep developing and informing until either decisions have been made to help or the project is final.

If anyone tries to blame you, point at the communications and remind them of the fact that you didn't have authority (I assume-otherwise this question is unnecessary) to make any decisions or to implement your suggestions without managements approval and that you repeatedly warned them.

Say something like, "I haven't figured out how to get my boss (Chris) to give me direction when I'm trying to make a very tight deadline. I've tried this; I've tried that. Can you think of anything else I could try to get more direction from him?"

Also say, "I don't want you to intervene...I just need help communicating with him."

As you've noticed, communication can be hard. One job of managers is to make it easier. So this kind of question is fair game.

Not the answer you're looking for? Browse other questions tagged management software-development deadlines .

23
How do I deal with a boss who has his “head in the clouds”?
11
How can we deal with the discouraging nature of a supervisor causing a promising intern to leave?
42
How to tell client about having missed their deadline?
11
How to handle unrealistic expectations from management
132
Bright Apprentice not being taken seriously
6
How to deal with mean/rude supervisor?
8
I stressed my coworker into reprioritizing their work and now I feel bad about it. Did I mess up?