Cliff note version, we need to be able to provided detailed info about what tasks each crew member did on a daily basis.

Easy example, we cannot justify billing a customer x amount when currently the crew is telling me "Monday 8 hours, painting" What is the easiest, hassle free way to get our crew to provide me with more specific info on exactly what was done.

I already get a lot of push back from the crew on obtaining their limited details now. They have been texting the info to me at the end of the week. We think maybe the crew needs to log their info on a daily basis instead so that come Fri night, there is not an issue of "I don't remember what I did Monday"

So I need help getting the crew on board with now providing very detailed (including how long it took to perform each specific task) on a daily basis.

Advice? Only thing i have come up with is giving them each a simple excel sheet that has 2 hour increments 8am-10am and so on, for them to fill out each day. I do not know if this is a good solution or even an effective solution... Please help me out, how have others addressed this???

In my professional experience, I have never met anyone who enjoys the process of reporting. The effort of reporting should be minimized, the importance should be emphasized, and if necessary the process needs to be backed up by incentives/disincentives for non-conformance with reporting guidelines.

Why do people hate reporting?

This is not painless, and is way too complex for something that simple.

Let's say you want to track how much time is spent on the following activities. At any time, your staff will only be doing one of them:

Imagine if the supervisor had an application on some device which always displayed the following options: 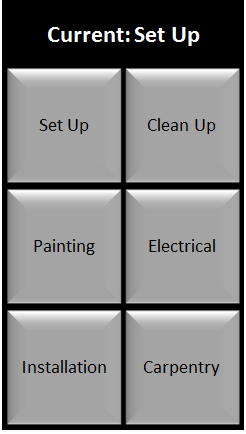 Whenever he changed the tasks his workers are doing, he could just pull out the device and touch a button. It would log when the task was changed, and what it was changed to. One-step, he's done. This would get you great information on what takes how long, and gives you the reporting with as little effort from him as possible.

Something like this could be set up simply on a web form (so he just has to go to a site on his smart phone, and it would automatically be logged in a Google Docs Spreadsheet, for instance). Or if you have several teams of contractors, you can create an application. If they don't have smartphones, you can get them a cheapo prepaid phone with net access that will allow for simple webforms like this. They get a benefit -- you get your reporting.

The above is just an example of how the process can be reduced from a 6-step process that takes a few minutes, to a brainless 'just hit a button when you change tasks' one-step one. The key is to figure out what method will work with your team, and create something that will be easy for them to do. If they were involved in the process of deciding how to make it easy to do, they will have a much harder time justifying not doing it.

The other important thing is to minimize the number of people required to do the reporting. If one person (preferably the supervisor) is the only person who has to do this, it will minimize the burden on the team.

Just giving them the system and telling them to use it will be less effective if they don't understand why this reporting is so important. The explanation doesn't need to be complex, but it should be clear and explain why this is important to the person who has to do the reporting.

While on your side it may primarily be a decrease in the amount of billable hours for work, that is an indirect consequence the team may not relate with. You can rephrase it as something the team should care about, such as:

Remember that job you did last month? You guys worked hard and did 60 hours of work. Because the reporting was only clear for 45 hours, the customer assumed you were slacking off 25% of the time. To get the customer to appreciate the quality of the work, we need to make sure they know how much work you've done!

Hopefully your team takes pride in their work and doesn't want the customer to think they're slacking off. Tying reporting with the customer's evaluation of the work may spur them in to action.

If despite making the process simple, and explaining the importance, your team still isn't doing a good job of reporting, it may be time for the carrot and stick.

On the positive side you can give rewards for regular good reporting. If the supervisor is responsible and reports with no omissions for a month, give him a budget to take his team out to lunch or for drinks after work or whatever. If he doesn't, you restart the counter (make it transparent so he sees his progress).

On the negative side you can structure his pay such that reporting has a negative impact on his evaluation/pay. For instance, you can make his next raise a bonus paid at the end of each project/week, which is reduced by the percentage of the time he doesn't report in a timely manner.

I don't like incentives in general, but they can help reinforce the importance of reporting to the company -- if lack of reporting costs you money, passing along the pain can help spur action by the people most able to do something about it.

At my company we are required to put in our time. If we don't, we don't get paid. That is a pretty simple incentive.

I would also look into time tracking software(specifically for construction companies).

For example, an employee would be required to select which job they are entering time for(say "West High School") and the cost code on that job ("Painting Gym").

Cloud based solutions are nice because then an employee can put time in anywhere and you will be able to see, approve it.

I think it is fair to require employee to use time tracking software. If you were to get audited it would be very hard to prove how much time you spent where. A paper trail(the software)would make it easy to show your records of what you have been doing.

Not the answer you're looking for? Browse other questions tagged time-management or ask your own question.

8
How to prevent employees inserting incorrect data into database