Appropriate ways to speak about commitment vs. involvement

I work in a software organization that has implemented a variation of the scrum methodology. One manager has shared the chicken and pig metaphor on multiple occasions to describe how the team members (developers + QA) are responsible for the approaches, tools, and methods used, and the results accomplished.

In various meetings, he has said things like "I'm a chicken. You guys are the pigs, so to speak", to emphasize the difference in roles.

I appreciate hearing the analogy- it demonstrates a valuable principle. But I think that repeatedly referring to ourselves as 'chickens' and 'pigs' in a professional workplace, in an off-hand reference to this analogy, doesn't communicate the highest sense of respect and trust.

What other approaches/metaphors/language could be used to encourage commitment and not just involvement?

What other approaches/metaphors/language could be used to encourage commitment and not just involvement?

I am put in mind of this diagram, which is on a slightly different (but related) subject: 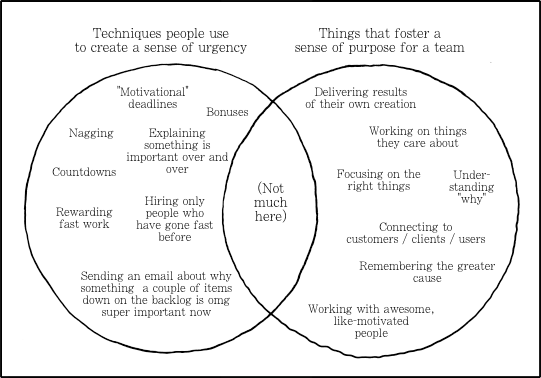 If you want your team to feel commitment to the project, provide them with the power and the tools to make meaningful decisions about the project that affect its successful outcome - let them choose how to do it, and support that choice. Build a culture that provides them with intrinsic motivation that will make them want to do a job well, and feel proud when they've done it. In particular, give those doing the work and empowered to make decisions about how it should best be done, a direct and personal connection to the stakeholders who are awaiting the output of their efforts. Help people understand why they are doing what they are doing, to appreciate the problems they are helping to solve, and a sense of shared camaraderie.

Don't call them pigs or chickens, or any other silly and potentially insulting names created by grey-suit-wearing drones in some corporation they've never heard of. Commitment to a project isn't achieved by metaphors. It's achieved by empowerment.

It's not just the metaphor that's weak, it's also the underlying dichotomy

I have never heard the ideas in this metaphor expressed in this way before. I think there are better metaphors, but in order to find and understand them it's better to abandon the phrasing of "involvement vs. commitment." A light reading makes the whole thing sound like you should turn your office into some sort of crazy suicide cult to get the breakfast made. That's actually the opposite of what it's supposed to convey, that the "committed" should exercise more say over how things get done than the "involved." It sounds like that's really what your manager wants people to feel, but being compared to livestock probably paints the wrong picture.

Instead of a dichotomy, just focus on the thing you really want: Empowerment

It ultimately does not matter if some people are merely "involved" while others are "committed", you need everyone to start acting like thinking adults who can make decisions. In order to do that, they have to feel like they're allowed to make decisions. The common management buzzword for this is empowerment, that they feel empowered to decide things.

The best way to do this, is to take an attitude that lets employees know that they actually get to make the decisions, by making them make decisions. "What tools are we allowed to use for QA?" "You tell me. If you need us to buy it, let me know and I'll get some budget allocated." They'll understand it once they realize that, they're allowed to decide and that deciding leads to things actually happening. It's hard to explain it to people, it's something you learn through action.

If you still need metaphors because you feel the need to explain this to people, use ones that put the burden of deciding or acting on the employee

In all of these, the burden for acting is shifted to the employee; driver must steer, the soldier has to attack the enemy, the surgeon has to do the cutting. The problem with the livestock analogy is that livestock doesn't do anything besides stand around until it's time to get butchered.

A great many relationships can be metaphors. Offhand, the following come to mind:

I'd say start with what works with chicken and pig. Two main things come to mind for me:

Considering especially that second point, the stream and canyon might work. Water may dry up and come again, but the canyon/landscape are forever invested in the result, whatever interaction happens.

Wow: a manager says he is certain to survive the project (all he has to do is "lay an egg") while his people won't (you'll become the "bacon" via the slaughterhouse)! To put it mildly, that's a strange way to try to motivate people. He should consider going back to manager school, and definitely back to metaphor school. If this is what he learned at scrum-master training, he missed the whole point. (tl;dr don't take his motivational speeches too seriously.)

But that's not what you asked.

A far more appropriate metaphor is midwife and mother. You and your colleagues are doing something very challenging ("giving birth") to deliver something wonderful and new ("baby"). The manager's ("midwife's") job is to guide you, clear away obstacles, and give you comfort and support when you need it.

Not the answer you're looking for? Browse other questions tagged team scrum .

8
Asking about internal notes about Scrum process during an interview
4
At what point is it appropriate to approach management about an uneven workload distribution?
35
Is it appropriate to ask to be excused from a chew-out meeting?
1
Under which circumstances it's appropriate to pick up your colleague's phone if he's on leave?
1
When, if ever, is it appropriate to collaborate beyond the “Brainstorming” process?
1
How appropriate is it for me to join in with non-work conversations, and to what degree (as contractor)?
5
Client is not happy about my ex-team's performance
6
Team managers hindering Scrum transition due to reluctance about developer autonomy