I live in Scotland and I'm having a lot of issues with returning to work. I was signed off work about 5 months ago after being diagnosed with severe anxiety and depression. I never intended to be off the this long, but issues with medication rendered me unfit for work.

Within the last 6 weeks I have been feeling a lot better, but my job is very high intensity and I don't know if I can return full time. I thought maybe I could face going back to full time hors if I moved to a different location, staying with my employer. I contacted one of my supervisors, asking about this idea about 6 weeks ago, he didn't respond.

About 4 weeks ago I emailed (I have four supervisors who all share the same email) saying I wanted to return ASAP, and would like to discuss a phased return or part time. Five days later, I got a response asking me to call and I was informed that both options could be available, but it was suggested that I think about my options and get back in touch when I knew what was right for me. I did this a few days later and never received a response.

Last week I emailed again, getting a bit angry about them not responding, and stated all the times I had contacted them regarding a return to work. And asking someone to get back in touch with me as soon as possible. Finally someone responded! I was informed that they may not be any part time positions, and I would need to come in for a meeting with one of them and a person from HR within the next week, and they would get back to me regarding a date and time ASAP. This was a week ago. I have heard nothing since.

This is so frustrating, I want to return, it is what is best for me. But all of this waiting around is causing a lot of distress and I am worried about a relapse. I contacted them 6 weeks ago about returning, why should I have to wait till now to come in for a meeting.

I am only earning SSP (they are denying me any company sick pay, though that is a totally separate issue), so it's very difficult financially, I am living in poverty. This is made so much worse knowing that I would be in a far better situation right now had the helped me return 6 weeks ago.

What can I do about this?

Surely this is very poor management, who can I contact about it?

Would I be better off just resigning?

Sorry for the long message in here, but I'm just so angry, frustrated, and confused. I have no idea how to deal with a situation like this, so any help or advice would be greatly appreciated!!

I was signed off work about 5 months ago

In the UK health system, if you are signed off (i.e. your doctor has ticked the box saying you are not fit for work), you should be revisiting your doctor so they can sign you back on (i.e. the line will say you are fit for work as of the stated date).

Here is the doctor's line: 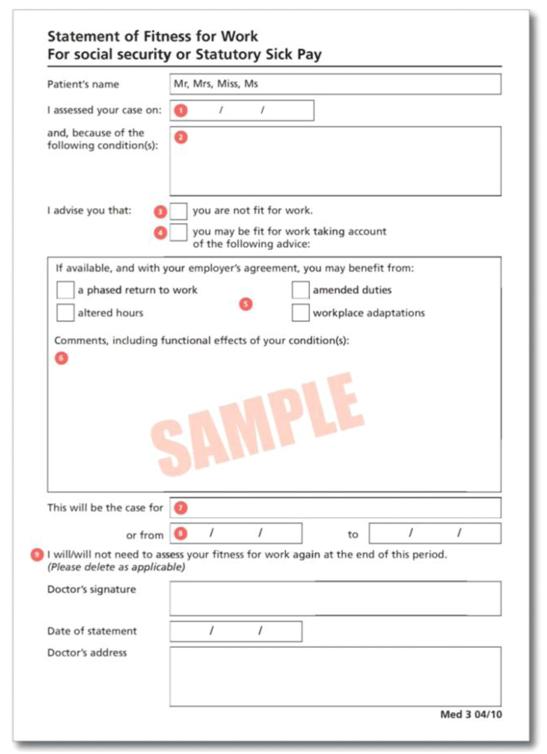 The doctor will likely have crossed out to say they will need to assess you again at the end date. He will give you a new line no longer saying you are not fit to work.

There should then be no issue, returning early without doing this is essentially against your doctor's advice, so it's maybe understandable if they are reluctant.

See your GP and get signed on again

As your employer has indicated that there there are no part-time options available to you and you feel that a full-time return to work may be too much for you at the moment you should look into Employment and Support Allowance and Universal Credit which you may be eligible to claim. Do this before your SSP runs out, I think it lasts for 28 weeks if I recall correctly. You don't want to end up without any income at all as this would obviously cause you further financial hardship and stress.

Good luck and I hope you feel better soon.

Not the answer you're looking for? Browse other questions tagged management sickness anxiety depression scotland .

19
How do I manage difficult ex boss returning from maternity leave?
65
Pressure to go back to work after heavy surgery
2
Emailed my manager asking about who is in charge in her absence
4
How to negotiate with supervisor to return to office duties after an operation?
31
Poor management handling of recent sickness and how to approach my return?