Can I take any recourse after being told to take down ' Xinjiang "Reeducation" Camps ' as my location?

Today at work, I got a talking to from my superior about something on my Skype for Business account being too political. Below is what caused the issue: 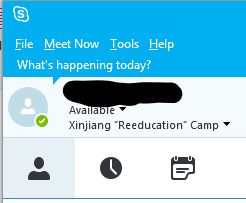 My location was set to Xinjiang "Reeducation" Camp as an (admittedly) edgy joke. I understand this is unprofessional, but our work tends to be informal (we have rubber chickens in my work area). The thing is, I have seen other people put up funny things as locations like "Where we are going, we won't need roads" or something like "Iraq" as their location as a joke. Regardless, this is what my superior stated to me:

I took this down as requested, since this was a direct order from my manager and replaced it with a Star Trek reference (Romulan Empire Outpost). However, I don't understand why this is political. At my job, you are required to be a U.S. citizen. The Uighur Human Rights Policy Act of 2019 passed unanimously in the senate (meaning bascially all U.S. citizens are on board). The place I work also refers to Taiwan as Taiwan, not Chinese Taipei as the PRC is so apt to call it. When she asked me to explain I said "it is a joke but is meant to refer to the Xinjiang Province concentration camps that China is using to oppress the Uighur minority". She then asked me what word (Uighur) I used. She didn't even know what it was, but yet she came to me saying it was political.

I'd like to point out a few things here, that I think are a little off in your assessment of the situation. (Edit: All of this is assuming that your Skype is used for official work)

It seems like you think that a joke on concentration camps (Especially one downplaying them like calling them an education camp) can be equated to a silly joke like "Where we are going, we won't need roads". This is not the case at all. One is harsh and should always be kept to a more private setting where you know it won't offend. The other is... well, just silly, non offensive. With humor it is always advice to use non-offensive humor in work-settings, unless you specifically know that harsh humor is accepted by everyone at your work place.

You talk about the relaxed setting at your work with rubber ducks. This is great and shows that humor is acceptable. Keep in mind that rubber ducks are also innocent in nature, so it doesn't show that everything goes, just that humor like "Where we are going, we won't need roads"is fine.

You say that your workplace Taiwan as Taiwan. This is fine, but keep in mind that there's no reason to assume that the person was offended by the pro Taiwanese opinion. They might as well just be offended by the joke because of it's dark nature.

You mention your manager didn't even understand the joke as if that means she can't ask you to stop. Someone complained about a dark, out of place joke that was political. She probably knew there are no rules specifically stating "No dark jokes" but there's one saying "keep political opinions to a minimum" so she took the route that the rules allowed, to help this person.

You made a joke that was not appropriate. It doesn't matter how many arguments you try to find that supports it being okay, because your manager told you it was not. Keep your humor more light and innocent.

No one has pointed this out yet. That sort of behavior is child like.

Just because 'everyone else' is putting something stupid as their location, doesn't mean you should follow them.

Set your location to your actual location.

Funny stuff in the office will not impress anyone who matters. You are putting yourself in the spotlight for all the wrong reasons.

unless you're a comedian and your office is actually a stage

See how rubbish my crappy attempt at a joke looks there... that's how you will be coming across.

There is an old saying that the best way to lose friends is to talk about religion or politics. Throw in the aspect of human rights abuses and the fragile ego of the CCP (as demonstrated by their banning of various western franchises that have been used to criticise them) and you have a joke that is guaranteed to piss someone off.

As a general rule, jokes that are likely to offend/annoy have no place in the workplace.

They care because those words can be seen by co-workers, teammates from other companies, and potentially customers.

You crossed somebodies line. The best approach is to go back to an acceptable location description.

It sounds like you misunderstood the "openness" of the office culture. It's typical for a tech company to promote various humor in relation to technologies and pop culture references like Star Trek or Star Wars quotes. That doesn't mean you can bring in political humor into the office at all, even if it is a popular meme on technology sites or video games.

My advice is to drop the political humor. I do agree that if your office has international ties it might hurt their business as they can get banned. Also several people may have escaped China to a better life. I heard a story from a neighbor whose brother's wife was killed while they tried to escape and how hard it was to leave her body behind in a field as they had to escape for their lives. So yeah, I can totally understand the sensitivity of the topic and why it's just best for you to apologize and drop it, never bring it up again.

Work is not a place to discuss or joke about religion, politics, gender/ sex, violence.

This has nothing to do with the culture being open or not or with whether such jokes are generally ok or not.

The problem is they are divisive. E.g. I don't want to hear that "men always" do something or "Christians are funny because..." at work even if I'm not a man and not a Christian. It's bad to stereotype or exclude anybody and such comments do. Your comment was similar in that it made fun of a highly violent phenomenon (reeducation camps), which could have made someone uncomfortable.

In your free time you can just leave if you're not happy with the company. In the workplace you don't. So don't mention religion, politics, gender/ sex, violence in the workplace unless in 1:1 conversations with close friends.

One unalienable option is to quit. Depending upon your jurisdiction you may also have the ability to sue or threaten to sue.

But not to put too fine a point on it, why would you want to? Standing up for your right to continue telling a joke that you consider insignificant in the office seems rather pointless. Your manager told you to stop, assume that there was a “get out of manager order card” that cost 5¢, what would you gain that would be worth irritating your manager (assuming that the manager continues to believe that changing your location was appropriate)?

I think you need to understand why you want to do something about this, and then determine what consequences you would consider acceptable to get the order rescinded or some other acceptable outcome (as well as identify such an outcome).

There isn’t a “make my manager happy that I got her order overridden” button.