I work in a very large industrial company that shall be unnamed. When I joined, I had no idea what I was getting into and what lengths they go to make sure everyone is “safe”. During my introduction, I noticed people are always talking about safety being number one above all else. I didn’t think much more about it till I sat at my desk. As I am beginning to log in, suddenly a bunch of people who I’ve never met start commenting on my hand and back posture while sitting at my desk. Essentially they say that I should improve it and gave me 15 minute session on how to sit right. A little ridiculous but whatever. That was last week Friday.

This Friday, I literally had multiple training sessions on how to hold the mouse, various people with tape measures sneaking around like Solid Snake making sure others and I were at a 90 degree angle. Worst of all of this, which I could maybe handle, was computer usage time. You would do some work and after like 2 hours a giant popup shows up and the screen and freezes your PC and asks you to do some stretches. That day may have been something special or the higher ups may be messing with me, because it showed up at least 4-5 times in a single hour and was super frustrating as I am devops and the system is partially broken as I am forced to touch my toes. I understand this is all for making the workplace better, but I sit at a computer not operating a large machine.

Those who don't follow these rules get disciplined very consistently. I don't really want to leave this company as I am a bit older and finding new work in the tech business is rather difficult for me.

I want assurance that this isn’t some fad that has shown up in the previous few years. I was at my previous company for over 12 years so I don’t know what has changed. Is this something that has taken over engineering or is it purely unique for me and if it is unique to me?

Industrial companies spend a heck of a lot of money every time someone is injured, even slightly. My friend of mine had family in food processing and they had to have someone walk along the factory floor because the workers kept leaning back on their chairs/stools to stretch and falling back and hitting their heads. That was costing about $200,000 a year all told.

Your company probably had to pay out a large sum over repetitive stress injuries. Part of the settlement could easily have included a "comprehensive repetitive stress safety and management" program that would include people who do all of this.

I work for a quasi government agency as a software engineer and while stuff like this is in various health and safety documents, nobody has ever enforced it with a ruler or a popup.

It might be common in the safety paranoid industrial industry, but most devops jobs would not have this.

It's heavy-handed but not entirely without grounds.

I've suffered from RSI, and it was not fun. Getting a better chair/desk/mouse/keyboard/screen/posture setup helped get better.

People in deep concentration aren't necessarily taking the best of care of themselves. They'll be fascinated by a programming problem while sitting hunched over for hours. They'll ignore their body's subtle hints that it's time for a break. A bit of tunnel vision is pretty common while programming.

For a company, it can be costly if employees sit badly and develop RSI. At best they'll be less productive. At worst they'll have to go on paid sick leave, which costs money but also the employees' absence disrupts projects that depend on them. The possibility of RSI is a risk that they have to manage.

Now, some people are more prone to it than others. But you can't really single people out and insist only those people set their desk up properly. Also, not everyone is all that good at setting up their desks themselves. It makes sense to have some experts set up desks during the onboarding process.

As for the mandatory breaks: 2 hours between breaks is actually fairly long, when you look at ergonomics recommendations. So it's not like you're on a short leash, this is an extreme limit for people who just lose all track of time.

So, while this particular company is doing it heavy-handedly, it's not crazy what they're doing. Just because you personally might not need it, doesn't mean it's not good policy, if it reduces the overall injury rate in the workforce.

Today we have a lot of information and data on ergonomics and productivity, as well as injury rates and so on. Sometimes it takes ridiculous forms, where some practices turn into "cargo cult" after dubious results are published.

What I think you are frustrated about is that you haven't been told about the extent of these practices and regulations. You should consult your manager about what you can expect. Also you can clarify who you suppose to listen to about these standards. You don't have to listen to any rando about your posture.

Otherwise treat it as any other weird workplace regulation.

It's a bit of madness. But we have seen other signs of madness here, like a company following you to the loo to make sure you don't take any phone interviews. That kind of madness is against you. Your company's madness is actually good for you.

You may not like it, mostly because you are not used to it, but what they do is in the end good for your health. So don't fight it, but embrace it. Yes, you will get less work done in an eight hour day. They must realise that (if they complain, then you can point out how your work is interrupted).

A very good technique how to do your demanding job without stressing out: You arrive at your desk in the morning. You pick the most important item that you should do today, and you do it. You completely ignore the second, third, and so on important items. And in the evening, you go home. You don't stay longer, you don't worry if you are interrupted by health and safety. The next morning, you arrive, but the state of your task list is a tiny bit better.

BTW. Make sure you have a good desk, a good chair, good lighting, a good keyboard, a good monitor. There are places where getting these can be a major fight. In your place, they should supply all these without many questions asked.

Safety is serious business in industry

To give you an idea how serious, the Oroville spillway reconstruction -- the contractor aimed for Zero Injuries. 24x7, 300 people at any given moment. They terraformed a mountain, filled a 100' deep ravine with synthetic bedrock (RCC), day and night (too hot by day), drilled 1200' of secant cutoff wall -- all in a huge rush to have the spillways usable in winter. 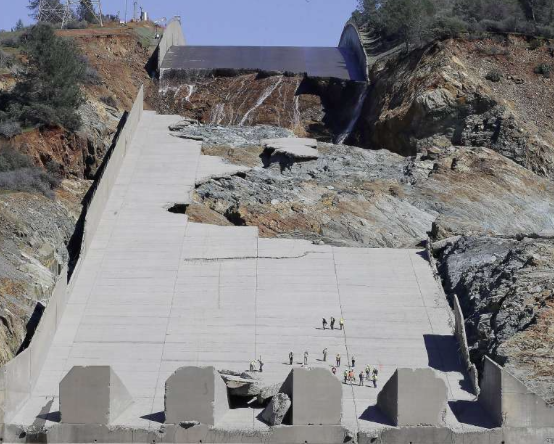 The tiny dots in foreground, are people.

A year and a half into it -- no injuries. (they finally did have some.)

It was, and is, a core cultural value for Kiewit, and a matter of beaming pride. I don't even know how someone could work for Kiewit and not care about safety, not be all on board for safety and as rah-rah as everyone else. "Sit straight at my keyboard? No problem. Take a wrist break? Least I can do for the guys driving forklifts around on a 25 degree slope." I would call that a bad cultural fit.

If that's not your cuppa, then don't work at a safety obsessed company like that. Don't try to change them. It's very, very hard to make safety a cultural value in a workforce. Once they have it, they're not going to blow it all by getting complacent and sloppy. Complacency is a cancer.

Besides, it really isn't fair that line workers should have to deal with far "sillier" procedures and PPE, whilst people in the office ignore safety altogether.

My partner's employer didn't pay close enough attention to ergonomics. Now my partner is on permanent disability and can't use a computer for very long. Successful admin career ruined. That company got off scot-free, but they might not have. Some people say it's fake, I don't think so. Some particular methods may be ineffectual, but the overall concept of preventive medicine in workstation design and use -- that's rock solid.

In fact, the most solid thing I can think of is the forced breaks. That is really helpful to health. Besides, you're in a situation where the company wants you to take breaks. Many would love to be in those shoes. Take 10 minutes an hour and walk around. If a boss asks, say "ergo break". Golly, There's a free lunch after all.

As far as that interfering with some emergency, that's an excuse to take even more breaks more often, so you are "rested" when an emergency arises.

Ultimately, it's about healthcare costs

Which are out of control, as you know. They do all this ergo stuff because an ergo injury can be nasty - even nastier than an industrial injury. It's actually cheaper than paying disability for the rest of someone's career. So, actuarially, it's about what's good for everyone as a team.

Back around to the "Days without a workplace injury" sign again.

I work for a company that does a lot of construction work. They aren't as focused on ergonomics as your company is but they do have someone you can contact if you have issues with your workspace. However, they do focus a lot on safety. There are several safety training modules everyone has to take each year and not all of it is relevant to folks with desk jobs.

Years ago, a fellow student and I both applied for a tech job at a shipping company. They did not email me the location for an interview like they said they would, or even provide an address at all, but instead gave directions over the phone. My classmate confirmed that this was deliberate when they told me the same thing happened to them.

When you work in a particular industry you have to deal with what's important in that industry.

So while I can't speak to whether that particular program that reminds you to take breaks is popular, you can bet that as long as you work for an industrial company they're going to make a big deal about safety.

8
New Job: Is it rude to insist on a particular device/setup?
12
Letting employees choose their own IDE
1
How to convince manager for better computer accessories?

19
My work can affect peoples safety, and my employer prefers rapid development over quality?
22
Approaching management about safety incident
54
Boss not providing adequate safety equipment
56
Dealing with safety issues in a factory
2
Is it acceptable to present a "safety moment" on excessive use of headphones?