How can we increase spontaneous conversations when working from home and using instant messaging?

Given the current state of working from home for many companies, instant messaging is the go-to communication method.

After a few weeks of using instant messaging, however, I noticed the distinct lack of small talk and spontaneous conversations that would usually happen. Conversation that would happen when having lunch together, grabbing coffee, or just passing by a coworker’s desk. Our team used to communicate much more often due to the in-person interactions.

We do have a group chat for my teammates, which we do chat on occasionally, and we do some small talk before meetings formally start, but the amount of personal communication has decreased.

A retroactive observation made over the past few months of the pandemic points towards spontaneous conversation being more than just about socialization. Conversations allow us employees the chance to better understand the overall circumstances and health of the company (eg. new hires and departees), gives us a choice for short breaks from the work routine, and lets us better bond with other members of the team.

Knowing these potential advantages, what can we do to simulate our normal in-person interactions and spontaneous conversation, and facilitate it between our team members?

Note: we do have daily scrums.

Edit: Have gotten some deleted comments that I am simply projecting onto my team members, and should leave them alone. For the record, I am thankful for the reminder, as I had not considered that I could be projecting before that. I will definitely keep it in mind, but I will clarify that I am not trying to force my colleagues to talk, I wish to find an online way to let us carry out our daily conversation if we wish to, not conduct an experiment on my fellow coworkers.

As such, I will clarify what I am looking for in terms of an answer: methods to encourage online conversation between my team, without disturbing our workflow should we choose not to participate in it.

I hope that this will address the concerns of some, and I should note I believe that these methods will actually be better when done online: people cannot 'escape' from small talk without at least giving some cursory response when in person, but can be more free to choose when to participate online, especially in groups or channels.

Update (April): I have followed the advice and answers given here, which have all been useful. I have mostly been passively observing the conversation without making any suggestions yet, but it seems that having a general/random channel has been useful.

Update (August): There are now periodic 'coffee talk' meetings scheduled over the past few weeks, that are fully optional. People looking for conversation are thus able to join and chat face to face about casual topics, and thus far this option has been quite useful. In a similar vein to the other question about departing toasts to our team members, video conference toasts to the employees has also been working well as an alternate medium to a farewell lunch.

Additionally, I've added a retroactive observation to the main body, about the other potentially beneficial effects from casual conversation, and gave out a bounty for the existing answer that suggested a 'coffee time' first, as it has been working decently.

Try having persistent voice chat rooms, like Discord. These are unmoderated'chat rooms' they're not formal meeting voice chats, they're designed for spontaneous communication. https://discordapp.com/ You might also include a 'meeting room' that people can switch to during meetings.

There's two types of Voice chats in the remote-world, meetings, and non-meetings. During a meeting people are less likely to bring up spontaneous chat because there's usually a purpose to the meeting.

Tools like Sococo https://www.sococo.com/why-sococo/ allow you to have a "Virtual office rooms" like a Breakroom, A quiet room, an open workdesk room. these 'rooms' are important to having people still feel like they're next to each other.

You have the freedom to 'switch rooms' at any time, and you'll instantly be able to spontaneously communicate with anyone in the meeting.

Using Voice chat, you'll have much more spontaneous communication that you would have with just text chatting.

It's important that not everyone is in the same room, as this could cause too much noise. 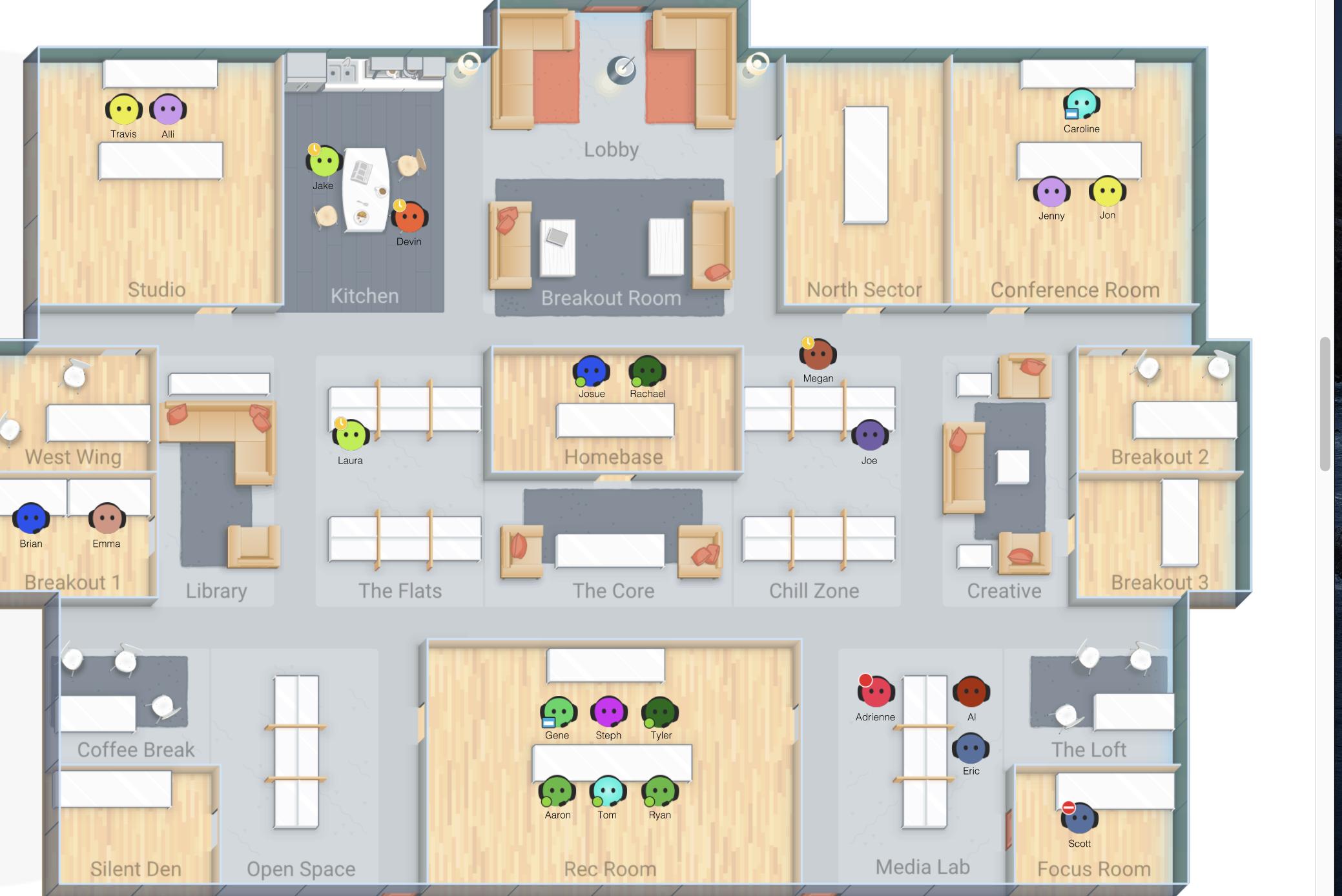 In my remote work environment, people occasionally post hyperlinks to interesting items, either related to our work or our city, or the epidemic, or whatever. Other people comment, and so we get a little bit of personal interaction.

We happen to use Slack, and we have a #general channel.

It's a good compromise between lots of distracting chatter in our work channels and no personal interaction at all.

Mind you that there are workers who get pretty much annoyed with all that small talk culture happening in offices — when people chat just for the sake of it without any business purpose. They make effort to participate just to be nice so that you won't even suspect they hate it. These people get huge relief when the need to do so comes off with remote working.

Consider whether the team actually wants it. You might be surprised to learn that many just want to get work done and that's all.

Get people focused on work first: when they need to communicate because the work requires so, they just do it and the question does not stand. And if they can get work done without any chittering-chattering that is perfectly fine. At the end of the day, they are working — as opposed to participating in some sort of social gathering.

Ask open questions: Who, What, Why, How, When, Which.

With remote working, many people will find it easier to get into the "flow", and some might welcome having less conversations. It depends on the person. Try to understand what level of conversation your different colleagues are happy with, and try to use open ended questions to stimulate exchanges.

They might reply later, but still engage. Also, keeping the video on in a shared chat might help as well (but again, expect some to say no).

In one job, a bunch of us temporarily worked remotely while we were moving from one office building to another (not quite ready) building.

We designated one 1/2 hour period mid-afternoon as "coffee time". We all took a break from work, drank coffee or tea and chatted remotely.

I can think of two options, waiting until people will start missing the in-person interactions and will start having more small talks using instant messaging or waiting until all start commuting to work.

With less of small talk, I would expect that more work is done, but there are other large factors too.

Formally schedule a time (usually on a Friday) after work where team members can hang out together online and drink alcoholic beverages, as the online equivalent of the business encouraging employees going drinking together after work as a team-building exercise. This is something that Atlassian does as a part of their efforts at building a workplace community - it's something their CEO mentioned in passing during an interview on (Australian) 60 Minutes tonight when discussing how businesses can do their part to help fight the Coronavirus.

The footage they showed displayed them using a software that allows multiplexed video chat (with each participant having a small box on the screen with their image), but presumably you could use whatever team-based collaboration tools your business is using - though, ideally, you'd want to use something suitably ephemeral to minimize the impact of people reading employees' drunken postings afterwards.

From my point of view it would be useless. I don't know you team or your culture, but I (software dev myself) don't like being interrupted during work.

When I'm in the office I am the guy sitting there with ANC headphones and doing my stuff. When working from home, I enjoy that I don't have to deal with unwanted stuff.

So in conclusion I guess the go to option would be to make it possible to talk to each other, like an always ready communication channel (like previously mentioned e.g. Discord), but the the sake of the sanity of your team, don't force them or expect them to join. From personal experience I can say, I would close all these apps unless really really necessary.

Not the answer you're looking for? Browse other questions tagged software-industry communication telecommute covid-19 .

2
How to do a Farewell Lunch while Maintaining Social Distancing

19
How to continue working with low morale and burnt out colleagues
8
Get colleagues to use the phone instead of instant message/email in high priority situations
0
How to to document conversations, facts and History in the project?
8
Is inappropriate to be informal in an office chat application?
352
How to convince HR to let my star employee work from home?
8
Instant Messaging: How to Politely Re-ask an Ignored Question
3
How to maintain engagement with a (newly) remote workforce?
3
Should I tell my employer about my mental illness for continue working from home?
118
I am becoming very unproductive because of working from home