Interview aptitude tests: the questions do not make sense, why do workplaces use these? 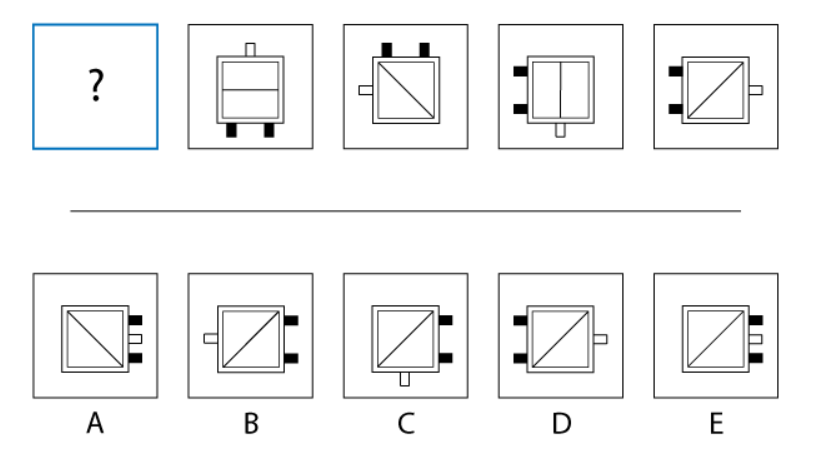 The goal is to replace the question mark with the image that fits.

I went with Image D, since I couldn't figure out what else it ought to be. Yet I got it wrong.

Why do recruitment process use these tests? What exactly are these tests supposed to measure? And what the hell is the correct answer in the above?!?

It is a pattern recognition assessment

Companies get a lot of applications, so their solution is to whittle down the applications with a barrage of tests with the theoretical goal of finding the smartest people. Companies much prefer to throw away good candidates than to hire poor candidates.

I agree with Matthew Gaiser's reasoning for how you are supposed to solve it.

When these questions are set naively there is a trick that sometimes works if you can't find all the patterns. The test setter wants to give you a set of answers that ensure you will get it wrong if you are wrong about the pattern for any one of the features. That means they are tempted to supply, for each feature considered separately, more correct than incorrect answers.

If I had worked out the patterns for the line and white tag, but not the black tags, I would have picked E over D because of the majority rule.

I don't think this would work on a serious, validated IQ test - the test setters would know that sort of trick and make sure it does not work, at least across a complete test.

Why do recruitment process use these tests?

Erroneous hirings are a huge mistake. This makes organizations go out of their way to avoid such mistakes. It is far better to simply reject people who might be bad fits as early as possible in the hiring process. The cost of a false positive (hiring someone who shouldn't have been hired) is far greater than is the cost of a false negative (rejecting someone who shouldn't have been rejected).

As much as I do not like superficial or seemingly irrelevant automated tests, I do understand why they are used. At every step from the initial screening to the final hiring, it is far better to reject someone who is good than it is to accept someone who is not good. An automated initial screening is cheap and fast. That it might reject someone who would otherwise be perfect is irrelevant. The intent is to reject as many as possible who might not be good. False negatives are acceptable due to the huge number of candidates, the vast majority of whom should not have applied in the first place.

I don't have enough reputation to post this as a comment; it's pretty long and not directly an answer:

These pattern recognition tests function well when used naively, but they break down completely once a participant knows something more advanced about math. If you care about this, for every finite sequence S of length N and for every new element E, there is a finite sequence S' of length N+1 that starts with the S and ends with E, i.e. S' = (S, E). You can basically append whatever you want at the end and still be mathematically sound.

Keeping in mind that these tests are nonsense once you see through them, I actually went with D as well when trying to play along. My reasoning is the following: (I'm going from right to left in this)

People using math that don't understand math to try to get rid of people not understanding math is always amusing when knowing something about math ;)

Not the answer you're looking for? Browse other questions tagged recruitment .

6
Unprofessional behavior of H1B recruitment manager; now employer trustworthiness is in question for me?
10
Why ask, “Have you ever worked for the federal government?” as part of the pre-screen questions of a non-gov't agency?
49
Recruiter called up twice to tell me what the interview questions are. Suspicious?
1
When does it make sense to apply for another position at a company that previously rejected me after the first round of interviews?
2
Why do some companies use recruiting companies instead of publishing the vacancy themselves?