Dealing with coworker who requests video on zoom

I have a particular coworker who always requests video when on a zoom call. This isn't ideal for me because I live in a tiny studio and don't have a fancy bookcase backdrop like him. My background is a bed and you can see my tiny kitchen which is a little embarrassing.

I've tried using zoom backgrounds but they aren't completely effective and you can sometimes get glimpses into my studio when I move. I'd rather just keep video off.

I was considering getting a room divider to sit directly behind me to block the view. Has anyone else found a better solution for this? Can I decline video?

If your background is embarrassing:

If you're not comfortable having your face on video during each calls:

For sure you can decline the person's request for video. If they are not your boss and the request doesn't come from higher up, you can say no without a problem.

Has anyone else found a better solution for this? Can I decline video?

A divider should be fine, but have you heard of a green screen?

That can completely cut out your surroundings, but may cost a little to setup.

Personally I just don't allow video. I never agreed to that when starting my job, and nothing anyone can do to force me. If anyone were to ask why I'd just say sorry I'm not comfortable being on video.

Can I decline video?

That depends on what problem using video is supposed to be solving.

If your co-worker is asking simply because they miss seeing people's faces, that's not a problem you're required to solve. (Assuming that your employer has not made putting a camera in their employee's homes a condition of employment.)

Has anyone else found a better solution for this?

You could hang a sheet from the ceiling or use one of those tri-fold poster boards kids use for science fair presentations as an alternative to buying a room divider.

Another idea: Can you get a web cam that you can reposition and zoom in on your face? Having a more narrow view might make any glimpses of the background too unclear to see anything.

Part of me wants to simply answer "You're overthinking this", but... you know what? I'll post a logistical answer instead.

So, first up: take a look at how you're arranging your furniture. Keep in mind, you can move your work desk to wherever you need. Maybe you've got it flat against the middle of the wall, and it looks straight out along the middle of your studio apartment. What about putting it flush against the corner and only letting the camera capture one half/side of the apartment? What about putting it next to the bed itself? Or for that matter, what about rotating the desk 180 degrees and offsetting it from the wall, so that you're sitting in a mini-cubicle and all the camera could capture is you and the wall behind you? Keep in mind, you have all the power in the world when it comes to organizing where stuff resides in your apartment. If something isn't working for you, brainstorm ways you could reorganize to improve!

Second, have you thought about getting a USB webcam and using that as a source (I assume you're using a built-in one on a laptop.) If you do it that way, you can have the webcam capture you from a different angle than face-on from the screen - which will let you have more control over what angle of shot is your backdrop. Between this and putting your desk in a corner, you can easily have your 'backdrop' simply be the wall to your side.

Third, have you considered going professional with the bed decor? Do a google image search for 'Studio Apartment', and you'll find result after result that look pristine, immaculate... and, well, wouldn't be bad for a backdrop. In other words, instead of fighting to keep a bed out of frame, add 'making the bed' to your daily morning routine and make it something that wouldn't be bad to have in frame.

I mean, I can't imagine someone thinking bad about this as a background: 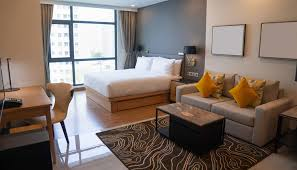 This is one of my pet peeves. There's something about being on camera that's different from being in an in person meeting that makes many people uncomfortable, myself included. Mandating or forcing people to be on video accomplishes nothing and is a fairly pointless dictate.

Not the answer you're looking for? Browse other questions tagged meetings .

18
Dealing with critics in group situations
2
Communicating with a manager who has no programming experience
5
Dealing with a colleague that talks too much
3
How to handle a boss who constantly stares with an angry face in meetings?
5
Coworker refused to to their assigned task; how to mention that in upcoming meeting with a new boss after a move inside the same company?
9
How to deal with colleagues who schedule meeting and join late
1
Dealing with Executive who is always late