Is it fair for my company to ask that I handover my “Inventions” to them? [closed]

Ask Question
Asked 3 days ago
Active 3 days ago
Viewed 394 times
0
Closed. This question is off-topic. It is not currently accepting answers.

I've been employed at my current workplace for a few months now. This month all employees received an updated employment terms document, with one clause reading as follows: 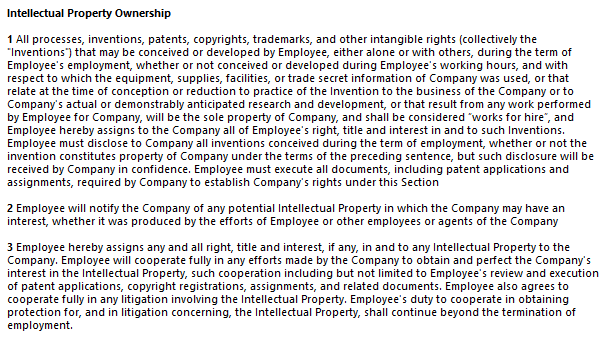 This raises several questions for me, the most important of which are as follows:

Lastly, will contesting this with my employer put me in a spot where I am either forced to accept the terms, or forfeit the job?

ethics employment-agreement
Share
Improve this question
edited May 4 at 20:05
SNag
asked May 4 at 19:36

SNagSNag
10922 bronze badges
New contributor
SNag is a new contributor to this site. Take care in asking for clarification, commenting, and answering. Check out our Code of Conduct.
9
|  Show 4 more comments

The first clause contains the conditions. It's saying that if you use company resources (equipment, supplies, facilities, trade secrets) either during working hours or outside of them to create something, or if you recreate the company's inventions ("reduction to practice"), either existing or proposed, then the company owns that work.

It's pretty standard. It's basically to stop IP theft, to stop you from using their resources to make money, and to stop you from attempting to patent work in your name which they paid you to do.

If you exclusively use your own resources, and don't do it on company time, and don't recreate the company's work, then they don't own whatever you create.

It is standard operating procedure. As a professional, I expect that type of wording.

What this does is to give right of first refusal to the company for anything that you invent on the side, but may have benefited from what you learned while employed. We don't always know what can be profitable for the company to use. For example, Glidden Paint hired a guy named Percy Julian who invented a number of soy processes including the ones to create steroids. Glidden was able to profit from these for a while.

How do people participate in open source? By getting written permission from their employers first. There are many companies who give up their rights in order to benefit the greater good.

This has been asked before, but to keep it brief:

Not the answer you're looking for? Browse other questions tagged ethics employment-agreement .

3
Using non-company-relevant resources from “group” training (like Pluralsight) towards a new role outside company
0
Is it okay to ask for a job guarantee at a company after an internship?
9
Inform an applicant that the for-profit school they went to failed them?
1
Quit company and work for another company that has the same end client