I caused a workman's comp incident. What is your advice for proceeding? [closed]

I have worked at a major theme park for (now) six seasons of operations. Until now, I have had an unblemished safety record (and because of my position, we are tested on record in various ways.) I'm a lifeguard.

Today however, I threw a soft-bodied water tube. This could easily be mistaken for the exact model. It is adult-sized. 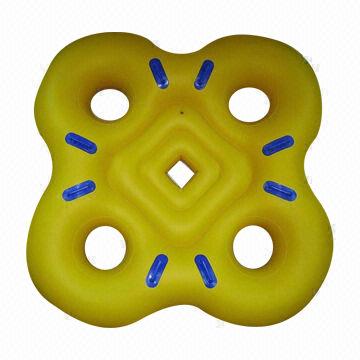 If the grapevine is correct, I have somehow broken another employee's wrist with this thing. (At least, it has certainly gone to workman's comp.) I am still in dismay that a normal person could have suffered such an injury from a short toss. However, two people say they saw me hit them with it. (To be honest, I had no idea I'd struck anyone at the time. I'm guessing I didn't actually look around the tube before I threw it to the ground and turned around to get another one.) I don't think they're lying, and neither am I.

I am in the wrong for allowing another employee to be struck regardless, however.

There are some caveats here:

I'm currently suspended, but I have 24 hours to submit a statement. What should I say? Should I bother? I've already written an apology letter intended for the injured party (I do feel bad), but not sent it.

(I'm not in financial jeopardy because of my other jobs; I have three.)

What should you write? Describe the task you were performing in detail. Include any training you received in performing that task and any feedback indicating how well/poorly you were doing it. If you don't remember the incident itself, just be honest and say you were performing the task assigned and did not see the other employee, let alone knew you had injured them.

You feel bad because you may have hurt someone. You will feel a lot worse if you get sent a hospital bill and are expected to pay for it.

I'd hop over to law.stackexchange.com and get opinions there. The most likely best approach is to find yourself a lawyer, and don't say a word, without the advise of that lawyer. If a lawyer costs $500 an hour and fixing a broken wrist costs $10,000 I'd know what I'd rather pay.

Not the answer you're looking for? Browse other questions tagged professionalism communication united-states unprofessional-behavior termination .

2
What are your options in dealing with an employer who does not pay for your gas when doing errands for him?
5
Caused unnecessary work for colleagues
8
What to do when you catch your co-worker sleeping?
13
How to reply to an angry email for a problem the sender caused
118
What should you do when eye contact makes your subordinate uncomfortable?
5
New Hampshire: Salary employee must take comp time for pay periods under 40h?