So recently some of the folks from our office left the firm. I work at a mid size multinational IT firm. So what I have observed is some folks have shared some memes in the sign off email on last day of work. Some of them I will attach here: 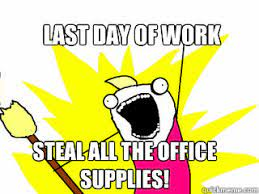 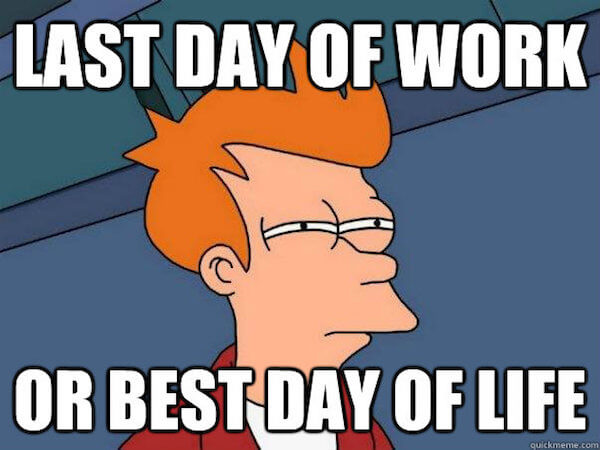 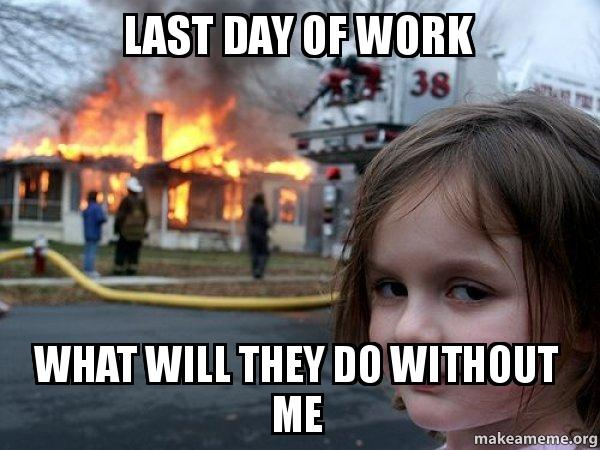 I was thinking whether it is advisable to share such memes on the sign off email? I am asking this because it may or not leave good impression about the firm to new employees.

It really depends on everything.

The actual meme, the person that's leaving, and the remaining colleagues.

In the first meme, if the person was actually reprimanded for theft, that's just the dumbest thing to say on the last day. However, if the guy is known to be a real stickler for not stealing supplies, then it might work, depending on their colleagues.

As a general rule, if there is even the slightest uncertainty about something, you simply do not do it. Of course, lack of uncertainty doesn't mean you're clear though, and it can still catch up to you in unexpected ways.

You tagged India, so culturally only you would know how well your organization handles humor.

Personally, I'd never send an email containing a meme. I expect my son wouldn't see a problem with it.

I'd say it's "advisable" to share a meme if you know it will be received in the way you intended, and for no other reason.

You never know when you will encounter someone in the future who worked at an old company you also worked for, and who remembers how you left it. It happens more often than you'd think.

Unless for some reason you happen to be fourteen and the company you're leaving happens to be exclusively staffed by other fourteen year-olds. Rubbish like this from fourteen year olds is not any better of course - it's just people will accept that they perhaps don't know any better and will cut them some slack.

The content of all the given examples reflect badly on the person sharing them IMO. Should a person doing this encounter a former colleague again in their professional life do you think it's more likely they will remember these memes and think "Oh yeah, that's a great person they posted some classic memes when they left" or that they will think "Hmm there's a question mark over this person's maturity and professionalism"?

While it's not massively likely that it will have unpleasant ramifications in the future (the most likely outcome is that it will be forgotten entirely) the chances are still non-zero and there is precisely nothing positive to be gained by doing so.

If you would include such a thing in a regular email if this was not your last day, go ahead. Your last day doesn't make it special.

But if you wouldn't and you just consider it because it's you last day? Don't. Your last day doesn't make it special.

It's the last day. So it's still a day at work. Be professional to the normal standards of your company.

Depending on the exact contents of what you send, you could be opening yourself up to a world of hurt doing something like this.

Take your third image for example. What exactly are you trying to imply with it? Because it would be very easy to read that as saying that you've sabotaged something, or failed to do proper handover, and you're expecting the place to burn down (metaphorically) after you leave.

And while that might be an amusing joke to share with a few co-workers, what happens if something actually goes wrong after you've left? If a sysadmin left a company having shared that kind of image in their final email, and then the next week a load of servers go down or the company gets hit by ransomware, how does that email get interpreted by senior management? Is it just a joke, or is it an admission that you've screwed them over? Are you absolutely sure that your former co-workers, manager and senior staff in your company will see it the same way you do, especially when they're looking for someone to blame for problems who can't easily defend themselves?

If you want to share something light-hearted in your leaving email, then that's fine. But joking about stealing from your company or having sabotaged them on the way out the door is completely inappropriate, and could end very badly for you.

The key principle here is to BE PROFESSIONAL as you leave. That means you don't send such memes or ranting emails or anything of that nature. Don't even send a blast email because most people at the company don't care that you're leaving and probably don't even know you.

If you have had a close working relationship with a few coworkers, you might send a short and simple email with a personal email address or a LinkedIn profile if they would like to stay in touch but beyond that, refrain from such behavior regardless of how badly you feel the need!

Of the memes you posted NONE of them are professional in any way and they will reflect badly on YOU. You don't know that some of these people may be your coworkers or even managers at some point in the future and your unprofessional actions may reflect poorly on you in a future job or interview.

I do notice a slight culture shift in how workplace conduct generally occur. At my current employer, using meme seems to be common practice since in MS teams you can post the meme.

However, I would be careful about what sort of meme you use. In the sample you gave the first one about stealing office supplies and the last one about burning the place down strikes me as something that may be misunderstood by some. The middle one with Fry seems to be okay to me as it cannot be misunderstood.

My thought: think of who you're sending the message to. If it is within your team and you guys generally share meme then that might be okay. But if it is going company wide and you don't generally do this this or see it, then I would hold off on it.

However, it's really your last day there. So in general it probably won't matter what you put in. Just don't threaten violence or show violence or some sort of act you wouldn't normally do at the office (like stealing things or burning the place down).

Some ideas are really dumb, and this happens to be one of them. It isn't necessary, it isn't appropriate, and it isn't "cute." Do you really need to send a "see ya" email to anyone at all?

Not the answer you're looking for? Browse other questions tagged professionalism software-industry resignation india .

5
Company may not let me tell my coworkers about my resignation
0
Should I ask for a new package or package revision
1
Can an employer retract pay/take other action for missed days of a contract after a contract is completed?
8
It's been a month since I didn't hear back about a technical evaluation which I was selected for; what do I do?