How to include creative abilities in cover letter/resume?

I found a job posting which explicitly states they are looking for creative people. I consider myself to be fairly creative but am unsure how to include this in a resume or cover letter. I don't see how an example where I showed creativity can be given without going into great detail. It's a tricky one and I know a current area of research is how to measure human creativity and I'm unsure how I could know if I'm creative enough for the job.

It's a software development job for a start-up company.

When Chris Spurlock was about to graduate from College, he created a graphical resume he put up on the net: 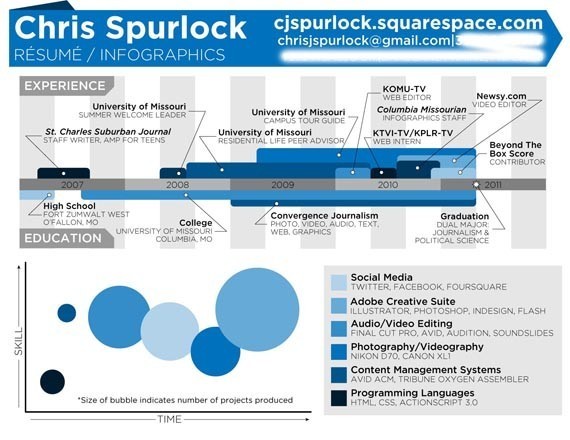 His resume went viral on the internet, sites popped up overnight creating tools to generate a similar resume for yourself.

His resume worked because:

He ended up getting hired by the Huffington Post as a result of his successful (and creative) resume. He thought about the goal of a resume (how to appeal your skills and talents to prospective employers), threw out conventional wisdom (a one-page document filled with bullet points), and created something that achieved the same goal in a new way.

Think of the Company

What does the company/industry you are applying to do? What sort of thing would appeal to them while appealing yourself?

What skills can you bring to their business, and what is an effective way for you to show it while showcasing those skills?

After you've created it, stand back and take a look at it. Evaluate it objectively. Ask for feedback. And then make whatever changes are needed.

There is a difference between creative ability and creative skills. The former is an overall personal quality, while the latter are concrete capabilities. If you simply say you are creative, you are implying that in a fuzzy dichotomy of the creative and the uncreative, you have enough quanta of some sort of creativity points, and are thus decidedly creative. The perception of whether someone is creative or not is the same as the perception of whether someone is funny or not, or what-have-you; it is subjective and hard to define. (The research you mention about measuring human creativity baffles me entirely; the concept of measuring a subjective quality is nonsense to me.)

Now, you can demonstrate acts of creativity. From Wikipedia:

Creativity is a phenomenon whereby something new and valuable is created (such as an idea, a joke, an artistic or literary work, a painting or musical composition, a solution, an invention etc.).

If you have some creative skills which enable you to produce new and valuable things, you have a wonderful opportunity to list them on your resume/CV, or even display them. It is much easier to prove you have creative skills than to say you are generally creative. Whether a recruiter or hiring manager thinks you are have general creative ability is up to how much they read into your presentation of your creative skills.

jmac's example of Chris Spurlock's resume is a perfect example of how you can prove you have creative skills. If your creative skills are in the scope of or symbiotic with the type of work you are seeking, then you absolutely should use your resume/CV as an opportunity to prove this. Spurlock's resume proved his ability to create attractive graphical material, as well as competency with the web; both of these were directly related to his desired work.

Using myself as any example: I am by no means an artist (I am a software developer by trade), but I feel that I have an eye for good graphical presentation, and I can use some Adobe products, such as InDesign, with competency. Thus, I made my resume in InDesign and included some (basic) graphics to guide the eyes to the main sections of my resume. The atypical layout I used has caught some eyes which I really hoped would notice my resume; plus, when I list Photoshop and InDesign as supplementary skills, I have already provided some evidence of that. Whether or not a recruiter reads into the relative uniqueness of my resume as indicating that I am "creative" is moot, since it really does depend on the person reading the resume.

I think you can put some work experiences which had your creativity. For example, you can say about how much your creative solution/idea/suggestion helped that project/task.

From your question, you dont want to go for great details; so it will be good if you use the very specific parameters like revenue growth/revenue saving/customer satisfaction related to your past projects. Because, the values/figures will give more measurability to your creativity rather simple statements.

Not the answer you're looking for? Browse other questions tagged resume cover-letter .