Ask Question
Asked 6 years ago
Active 6 years ago
Viewed 503 times
1
Closed. This question is off-topic. It is not currently accepting answers.

I coordinate a small team that is responsible for (among other things) a software-based IT helpdesk solution. I'm looking to introduce a fun rolling award for the "helpdesk champion" of the past 30 days that in some way is linked to each person's performance in completing jobs via the helpdesk (as an incentive to engage with it etc.)

The helpdesk software allows me to get data on the following for each person:

I figure this allows me to potentially figure out some measure of quantity, timeliness and thoroughness of their work. Any suggestions about how I might be able to work this into an algorithm/weight this data somehow?

Here is a set of sample data from my system: 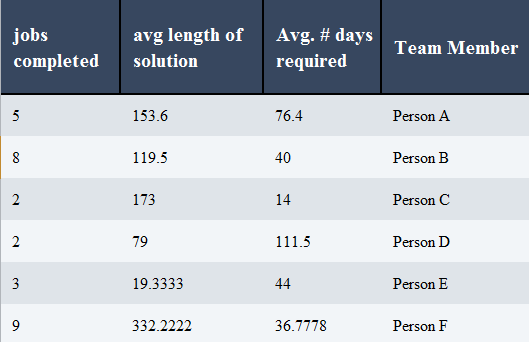 What you will end up with are;

If the system can be abused, it will. At one place I used to work in a system such as this was used to determine who would get a contract. If the score was too low, they would loose the support contract next year. As you can imagine, the abuse of the system was rampant. The biggest issue was the support staff giving a quick almost automated reply within a couple of minutes and then closing the ticket. Since that rarely solved the issue I had to create a new ticket. This was then repeated until I gave up and solved the issue through google myself. But from a measuring perspective it was a huge success 5-10 tickets, all solved within an hour.

If you do this, at least add a large negative point for support tickets being reopened, due to not being solved correctly.

But you really want to do measure performance somehow, which I think is a good idea, measure what really matters. Customer satisfaction. If the customer isn't happy, then it doesn't matter if they solve hundreds of support tickets each day. Just have the customers fill out a quick customer satisfaction survey afterwards and measure the response. Make sure it takes them 20 - 40 sec to fill out to make sure they feel they have time for it.

An IT helpdesk isn't an assembly line. You can not rate the value of a helpdesk employee solely by how many jobs they complete, because every job is different. There are small-impact and large-impact problems and there are problems which are easy or hard to solve.

To give you an example: Employee A spends the day resetting 50 passwords the users couldn't remember. Employee B spends the whole day getting a crashed production system with 1000 users to work again. Who was more valuable today?

According to your metric, A completed 50 jobs, but B only completed one, so A is 50 times as valuable as B. But actually A fixed the problems of 50 users while B helped 1000. So who is really todays hero?

When you truly want to measure performance, you need to measure the actual business impact of the work of your employees. Rate each job by complexity and priority and use this as a multiplier for the score.

2
What are my options for performance appraisals for software engineers?
-1
How can I implement a sales incentive for a helpdesk type sales funnel?