Pornography In The Workplace

NOTE: This is a situation I've faced in a previous job, it doesn't relate to my current employment. I'm curious to know how people would handle this.

Part of my job involves reviewing video clips which people have sent in. We review these videos before putting them on the web for our subscribers.

As is normal for User-Generated-Content, we get sent in pornography. Each video has to be reviewed to make sure that it doesn't breach any laws. Even the "adult" videos have to be assessed.

All the employees in my team have signed a waiver saying they're OK with looking at adult videos - and they can stop at any time with no questions asked. HR and IT security have given the OK to my team to look at these videos.

Reviewers work on a queue system, so it's random whether they get an adult UGC video or not. They do not review content full time. Maybe up to an hour a day interspersed with their other tasks.

My problem is that other people in our workplace haven't signed such a waiver. We have an open plan office with fairly flexible seating. So it's quite common for people to wander around the office.

I've gotten some comments from various staff members like:

You're doing a lot of things right. Checking with HR and IT Security is good. Asking your reviewers to agree formally to the possibility that they might see nasty stuff is better. Giving them the right to stop looking at any time is even better.

Providing some sort of Employee Assistance Plan if somebody's totally grossed out might be a good idea.

But, in a 5,000-person company there is absolutely no excuse for insisting that people in this job function sit in an open-plan office where random people from other departments can walk around and look at whatever screens they want. That's a huge risk. Somebody is going to attack the company for systematically maintaining an oppressive workplace.

I worked in a 30-person company in the USA that had to do this kind of nasty work. We had these reviewers sit in a separate room with a closed door.

Go to your HR department, NOW, and ask for their support. They need to support you because it's their job to maintain a safe and legal workplace. Then go to management and ask / tell them to set up a visually isolated workplace for these reviewers.

If you're in this situation and you don't act on this you will be sorry.

We actually had a very similar case in a company that I worked for - in this case, they developed set-top boxes, and they tested new versions for compatibility of all types of pay-for hotel movie content... including adult videos.

In this case, they had a test lab. The test lab was a small room with a door that closed, and that was where ALL video content was tested. Workers knew and agreed to the content, and I believe they hung a sign showing something fairly bland - "authorized personnel only". If you were on the team, you were authorized. If you were not on the team, you had no business complaining about seeing inappropriate content in a room you weren't supposed to be in.

Managers around the building knew the deal and responded to any complaints.

I'd advocate for trying to change the office layout, simply because people watching videos all day (any videos!) is pretty distracting, even if they are using headphones.

This seems like a management problem. As in management hasn't taken the extra steps needed to negate a possibly hostile situation.

I'm certain other solutions abound, but to not use some of the more easily implemented options available is asking for problems.

Look into muscling those who did not sign the waiver into signing the waiver, or some form of agreement that specifies "I shall not look at other people's screens" as a mandatory alternative to signing the waiver. Caveat: many jurisdictions require employers to provide a workplace that is free of harassment including sexual harassment, so I am not sure that my last recommendation will pass legal muster. Consult HR/the firm's legal counsel.

I think segregating the PC used for vetting videos makes sense for this situation. Rather than have several interviewers spend one hour each every day, we could assign a single reviewer at that segregated PC for a full day or half a day, and rotate among the reviewers.

Follow-up comment from @Chad "The op is an employee and may not have the ability to modify the work area."

Follow-up comment from @Pepone "well the employer does have the ability and should have done so to in the first place."

OK, we have a consensus on segregating the PC.

This sounds like a solution for environmental signage, education & co-worker awareness.

If this is an open office plan, is there some way that designated staffers could have some visual cute on their desks or cubicles that indicates, “Hey, these people do content review work… Be cool…”

Such as a gold star or some indicia on their cubicle/desk label? And perhaps an explanation on the corporate Intranet coupled with an employee awareness session that basically says: “If you see staff with a gold start on their nameplates, that means they do review of user generated content & they might be viewing material that might seem inappropriate at times but this is all accepted.”

Perhaps ask H.R. to include something in orientation/on-baording that will allow the issue to be addressed at the start so nobody is shocked if/when someone comes across someone viewing what might seem like inappropriate content at work?

At the supermarket you usually have a light indicating if the register is open, in studios you have the on-air signs, so maybe you can implement something like that? The light would automatically go on when the computer is in "review" mode.

An extra room where you can review the videos without interference sounds too creepy. :p

Rather than have employees who are physically located in the office performing such content review, you should consider employing individuals who will work remotely to provide the service. There is no element of content review which benefits from physical colocation of the reviewers with the rest of your employees as far as you have described. You will also benefit from the increased productivity of people working from home, as well as a boost in productivity from not being exposed to an open floor plan (which has shown quite conclusively to be detrimental to productivity). Your organization would also save money in terms of the facilities and utilities not needing to be provided to remote workers.

There are a couple issues I can imagine that some organizations might have with this. The first one that comes to mind is that since this task is currently carried out by employees in short intervals, it is not recognized as a task worth employing someone full-time to perform. This is simply flawed thinking, as the employees who spend time reviewing content are still being paid. Concentrating that task into a dedicated role wouldn't change anything in terms of how much is being paid for the work to be done.

The other concern might be simply that the organization doesn't know how to handle remote workers. This is something that all organizations are going to have to learn, and those dealing in digital products or services will need to learn it soonest. It would be to the organizations benefit to begin working towards supporting remote workers, and this task really sounds like it would be an excellent practice case. Content review likely doesn't involve meetings and constant communication as something like development or operations work might, so there would be fewer hurdles to clear.

There are companies that specialize in providing content filtering and moderation services for sites that accept community created content, why not outsource it to the people that are experts in dealing with these kinds of things?

It's potentially very icky if someone feels that their exposure to this in their workplace is worth speaking with a lawyer about, and someone could also say that they felt coerced into 'being part of the team' that has to be exposed to this else they wouldn't have certain advancement opportunities.

Firms that I've worked with in the past have been very well set up for this sort of thing, they have the legal and HR aspects covered, they have complex systems that limit the amount of human exposure needed - and they're probably going to be cheaper than what you're spending now.

Make it the problem of someone specifically set up to handle this sort of thing, and you don't have to worry about it anymore. The only work on your end is doing whatever is needed to tie the third-party into the process, and I'm sure they've got people that can help you with that as well.

If we have hanging boards around the review section(may be way in and way out) notifying about the situation, then those who come to that part of the office will definitely won't see the unexpected.

I think you need a screen in this case 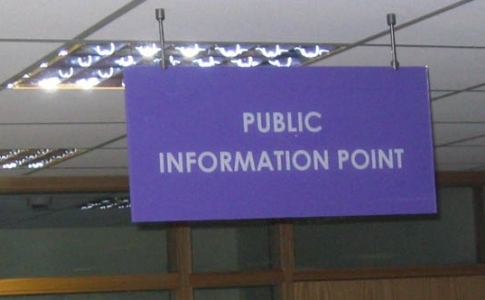 Not the answer you're looking for? Browse other questions tagged united-kingdom .

64
Returning to the workplace after sexual harassment and arrest of harasser
40
Are beards perceived as unprofessional in the workplace?
6
Should I encourage my workplace to hire someone I know is ill?
9
How should I handle offhand sexist “banter” in the workplace?
5
Do I have the right to be removed from the employees section of my current workplace website?
3
Workplace still has me on their payroll and wont delete me