What is the purpose of Six Sigma?

I have heard the term Six Sigma being used around the office and would like to understand what it means and what it is used for. Is it going to completely change the way I do my job?

6 Sigma is commonly used as a measure of quality striving for near perfection. Originally, it was used in manufacturing as a quality control objective of reducing the end variation of process output such that the customer experience would result in no more than 3.4 defects per million opportunities. The term of 6 Sigma derives from the 6 standard deviations (represented by "σ") strived for between the mean and the closest standard limit. On the graphic below, a shifted 6 Sigma (4.5 Sigma with 6 Sigma's arbitrary 1.5 Sigma Shift) plot is illustrated rather poorly in green. This is compared to a normal distribution (a 3 Sigma process), illustrated rather worse in red. 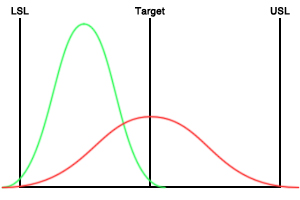 6 Sigma proposes the use of a specific set of quality management tools, statistical methods, and specifically qualified managers to implement projects with quantified financial targets and well defined milestones.

All of this is a rather long-winded way of saying this:

It should be noted that 6 Sigma is a buzzword and is nothing significantly different than most versions of quality improvement. It has become exceptionally well marketed by consultants and certification organizations, as well as the success of larger companies using this particular form of quality improvement.

For What It's Used

For the most part, 6 Sigma has its roots well and truly entrenched in manufacturing, though other sectors have begun extrapolating its processes into their own lines. Ultimately, the goal is about standardization of processes to increase quality.

It has been employed successfully in large corporations, healthcare organizations, and manufacturing as a means of reducing costs and increasing client satisfaction.

Changing the Way You Work

Potentially, application of a 6 Sigma process to your workplace could very well change the way you personally work. The rigid structure offered by the process can reduce the overall variation of your job to either increase profits or decrease costs, though it can also lead to decreased adaptability.

More often than not, the end result is that a consultant or consultants come in and insert themselves in the process to lead the direction the company takes in response to its goals. It's quite common to then watch these companies underperform in relation to the market.

To measure, improve upon, and continually adjust the functioning of processes. It has its roots in manufacturing, and has a pretty thorough wikipedia article.

The term itself comes from the value 99.99966%, which is the defect rate Motorola set for its production (that is, 99.99966% defect-free parts), and when applied to areas outside manufacturing, has the overall goal of reducing mistakes while improving quality.

Six Sigma is seen, by some, as part of other process improvement methodologies, such as 5 Whys, continual improvement, and lean manufacturing, where the goals are to find and remove obstacles, in efficiencies, defects, mistakes, and other things that lower quality (of delivery, of products built, of parts made, etc.) and costs involved in producing something, whether that "something" is a physical thing, or a result from a customer service interaction, or answering a service call, or improving reliability, etc.

The purpose of the original 6 sigma was to improve quality of production at Motorola but has morphed into various incarnations beyond its original purpose.

Will it change the way you do you job? No

You will be doing a lot more reporting learning about "Belts". But in the end it will matter very little as long as what you report for 6 sigma won't produce numbers that will be far below the average that the consultants hired to introduce this into your company calculate.

If this misapplication is done with some common sense and attention to actual outcomes, it can result in positive improvements in overall process that lead to products that are more uniform in quality, consistent in formatting and style, and reflective of a good "corporate memory" in which past customer concerns and work done are never forgotten. Depending on how well your office currently does on such points, the impact can range from very large (but positive) to not much more than reinforcing good procedures and training already in place.

A much more worrisome situation is an overly literal application of the Six Sigma concept of assembly line manufacturing models to the actual content of your office products. Assembly lines reach six sigma by finding where variations in the assembly line process are preventing a physical product from being replicated exactly replicated. E.g., if you are making forks, you want all of the forks of the same type to be as close to identical and to what was intended as possible.

The difficulty is that office products such as resolutions of problems with individual clients, or creation of custom software applications, don't follow that model. That is, as soon as you get away from assembly line replication of identical physical products, you don't want every product to be exactly the same, because by definition that means you are not really solving new or unique problems for your customers.

True manufacturing literalists -- and I've had to interact with some interesting ones quite directly -- can be very aggressive and evangelical in their approach, often going straight to the top of a corporation and using manufacturing arguments to persuade them to implement such changes throughout a company. I've seen some very unfortunate outcomes in such cases, for the simple reason that case-by-case problem solving really is not much like manufacturing, so much so that the metrics that work for manufacturing can lead you to do literally silly things in other disciplines.

Here's a simple example of what I mean by that: You say that you want six-sigma error reduction in software applications, as measured by errors found per thousand lines of Java code, and you don't bother qualifying how to get it. What will the typical outcome be?

That's easy: Massive code bloat and a dramatic decline in the production of marketable applications. Huh? Why? Because the easiest way to meet the six sigma quality metric is to pack the Java code with proven and/or meaningless replication of "safe" code.

How about for sales? Even worse. Certain office activities absolutely must accommodate large margins of failure in the details in order to succeed overall. Expecting most efforts to fail is for example the very essence of the venture capital model. Misapplying six sigma precepts in that context -- that is, to exploratory processes for which failure in the details is fundamental to finding the nuggets of success -- is just plain scary. I would like to say that no advocate of either six sigma or other quality processes would be so silly as to do that, but the unfortunate truth is that companies that advocate such methods often hire inexperienced people to promote their ideas, just like the rest of us. An enthusiastic advocate who is unhampered by the experience of abject failure of whatever they are advocating often can be very persuasive for promoting its use in bad spots.

So, bottom line: How six sigma will affect your office depends on many variables, including how your office currently operates, what variant of six sigma is being applied, and (especially critical) how experienced the proponents of such methods are at knowing the differences between changes that can truly help (e.g. quality uniformity, corporate memory) and change that can be devastating (e.g., forcing "super safe" behavior by people whose jobs cannot succeed overall without allowing individual failures). But one thing should always be kept in mind, especially by people considering (versus responding to) the application of six sigma methods: Unless you are doing true manufacturing of actual, physical products on an assembly line, the analogy is and always will be false. Processes that work well for offices must accommodate and encourage creative problems solving, and use must use metrics that encourage both. You won't find them in six sigma because they aren't there, at least not for the actual "six sigma" problem reduction part.

Six Sigma is a program to improve quality of the products an organization makes. It initially focus on manufacturing, but it has been expanded into into services. The goal is to make sure that even the items on the ends of the bell curve, will pass the quality control checks.

Since most people don't produce enough items it is impossible for the 3.4 defects per million objects to be applicable. No developer could achieve that goal. At 100 lines of code per day, a developer would only be allowed 3.4 bugs in their career.

The other part of six sigma are the tools and methods use to evaluate the current process, find root causes, propose solution, test them, and evaluate the results. The tools are interesting, but the key is realizing that the overall methodology is the scientific method. You don't tweak the process until you have crated a hypothesis and done an experiment.

Will it change your job? IT can't be successful unless the correct levels of management encourage it, and nurture it. The power to design the experiment, and test the hypothesis is done by the team. If a team learns that every time they resolve an issue management files their report away, and never follows through; they will stop trying to fix problems.

Organizations that have tried to fake six sigma, or TQM, or quality circles by ignoring the results, or by creating teams to work on minor problems end up wasting time and money with no real results.

Organizations that nurture the process, reward the participants, encourage participation,end up with a better product. It might be better quality, lower costs, less waste, but it should lead to a better bottom line.

Not the answer you're looking for? Browse other questions tagged terminology .

13
What does "years of professional experience" entail or refer to?
4
What does senior director mean?
2
What is it called when a manager/executive does a job alongside a subordinate?
5
Is there a commonly accepted gender neutral convention to replace the abbreviation EQM (Equivalent Manpower)?
3
"permanent line position": what does it mean in the US?
6
What do you call it when a small team sequesters itself away to make progress on a project?