Should I feel obligated to work extra hours because of project mismanagement?

What's been happening is that my mobile team is kind of short-handed and we have lots of projects to deliver that our manager committed to, knowing we were short-handed.

Even though we all stated to our manager that we won't be able to meet the delivery dates because we have too much work, she keeps telling the bosses that the projects will be delivered. After all that, now she is asking us to work extra hours every day and on the weekend. I've already done some extra hours (around 15 hrs this month and 10 hours last month) and I don't feel like working on the weekend, especially when I want to do other things and mostly because this happened because of poor management.

At the same time I feel a bit guilty because I do have the spare time to work extra hours, but I would rather go to the gym or stay home studying or programming.

Any advice on how I should handle the situation?

Edit: Just to state that all my extra hours are paid.

There's a Difference Between "Team Player" and "Sucker"

You could be a nice team-player and agree to do some occasional extra work (as you did), under some specific circumstances. But you should never let that become a habit.

Follow the "Man with the Plan". Beware of the Prophet.

Personally, I'm willing to participate in the occasional rush if it's clear-cut and you know where you're going: management has a plan in place, you know how much will be expected, for how long, and, most importantly, WHY you need to do this and HOW these extra hours will translate to added-value and help the project.

If all you hear is "it's just one time" or "just a few week-ends" and that becomes a motto, or if you see people working on week-ends but that it doesn't translate to actual value on Mondays, it's a gigantic red flag. A good example: people staying late to finish a build on Friday evenings, or to build or run smoke tests or UATs on Saturday mornings, or do a migration from DEV to QA or whatever. Most of the time I've seen extra-time for these, they translate to very little added value: the build will generally take longer than expected, or fail, or critical tests will fail but the right person won't be here to fix them. So, in effect, some poor souls showed up for almost nothing, and the problem that was there on Friday is still there to fix on Mondays. Don't bother.

In fact, Dilbert says it better than me:

Same as fixing some stuff at the last minute on a Friday evening if there's no launch or if the critical person to check it won't be there. Just show up maybe a bit earlier on Monday. They'll likely be busy too anyways and you'll have just the same time to do the work, except you'll have the support you need, and you won't be exhausted.

Plus, you know, your kids won't call you "dude" or "lady" instead of "dad" or "mom", and your friends won't ask you where you've disappeared the past few weeks/months and if you enjoyed your travel through a space-time rift.

Still, Some Business are More Prone to Rushes

Keep in mind that in some industries there are specific "rush" times because of deadlines that can't be missed (e.g. eCommerce for sales periods, big sporting events, etc...). Not that it means there should be such rush times, but software being what it is, it's likely there'll be a few. It's still a big red-flag that some people screwed up, but it might be acceptable. Plus sometimes business "go-lives" will be done at odd hours so that legitimizes the overtime as well.

In any case, if you hear this, it means your workplace is really getting a bit toxic: "you know, everybody's been pitching in a little, so make an effort. We need you this week-end! It'll be just one time!"

Run for the emergency exit. Because:

But if the project is just clearly going nutty and mismanaged, just say NO. Otherwise it will be a disservice to everybody.

Everybody needs a break at some point, or quality will go down, and the deadline will likely keep extending. Most likely, it's the management processes that need rework and they need to face the fact that they screwed up and re-negotiate a new realistic deadline.

Also, never do the extra hours for free. Well, almost never. One hour here and there, but 15... hell no!

There are cases where contracts for higher-ups include clauses covering extra hours, but in some other cases it's just a no-no. It's illegal in some countries and jurisdictions, though it's quite dependent on location, labor laws and of course your actual contract. So get some info on your local labor laws for a definite answer on that front.

And management shouldn't be surprised if half of their team walks out the door at the end of the project (or before it) anyways if they try to abuse unpaid over time.

In fact, I've seen that happen quite a few times. Luckily, generally people have a sense of team-spirit and pride, and they won't let their team down until the project is finally done (be it launched or dead...). Which is nice, though maybe that prevents management from seeing the real issue. And then suddenly, you see 15 of your best engineers flock the hell out of the place to greener pastures, with good reason.

And keep an eye out for "hidden" over-time as well.

It's Rarely Rewarding and Rewarded

Keep in mind as well that perception of work and performance are very often quite disconnected of actual performance: 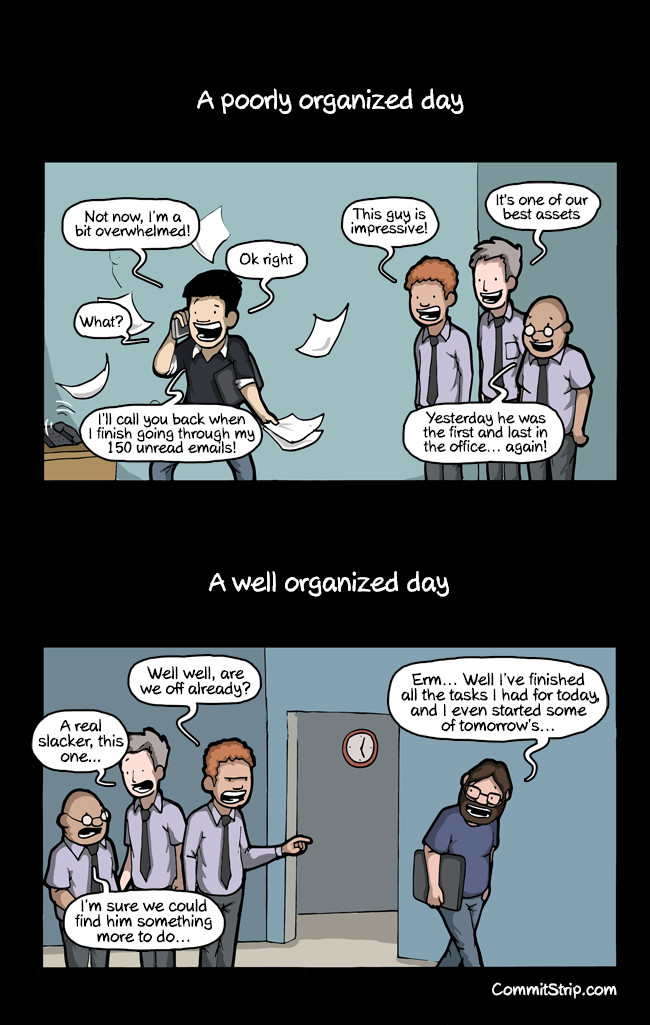 So, it's not really worth it to work all that extra time if: 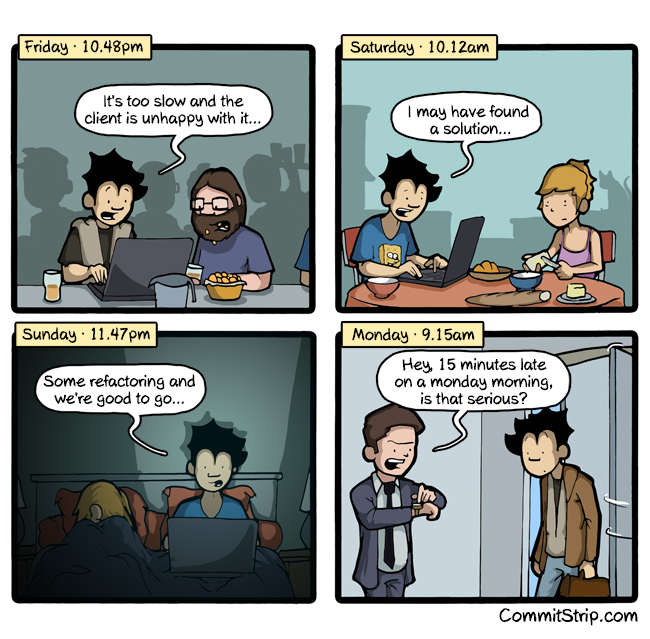 If You Really HAVE TO, Keep it FUN!

Maybe that bit will be on you and not your management, and it's not really part of your question, but if you can't get them to let go of the crazy extra-time, make sure to keep it fun with your teammates.

Though it's easy to think "I see these people way too often lately", it's very beneficial to share more than just work in those times. It will be therapeutic (and give you the opportunity to frankly b#tch and moan about the project/management) but will also ensure bonding is OK. So if you can just say "hey let's go for a run Saturday morning before launch" or "let's grab a beer after that build is done before lunch", do it.

Regarding kids at the workplace... They can be great mood-supressant, but only:

So make sure to check everybody's stance on it. If you get green lights, it's a nice thing to do once in a while: they help to keep the ambiance "family-friendly" and low-key during that dreaded Saturday morning smoke-test run, and it gives your kids an opportunity to see what you're up to. Plus you'll have them nag you to get out of there, so you'll definitely keep on your task and get it done and GTFO ASAP.

This is all fun and nice, but what do you actually tell your manager so they can see the light and realize they've been working everybody to the bone and something's gotta give?

There's actual academic research on the topic and heaps of not-so-academic texts as well (this place probably being a good source as well), showing that stress and overtime have negative effects on your health and private life (duh!) and on your work performance:

I always come back to something one of my first managers told me:

That's not to say you should automatically say "no" to this kind of request: if putting in a few extra hours can make a significant difference to the success of the project, then consider it - but if it's happening on a frequent basis, then it needs to be escalated up the management chain so it doesn't happen again.

You don't say whether you're getting paid for the extra hours or not - if not, then one thing I'd expect from management in return is not to be overly officious about people working every minute of their contracted hours in "quiet" times - there has to be some give and take in this.

Sometimes there's no other way. Two weeks ago we were presented a new feature that we're going to support but not develop (outsourced) after I continuously asked what it's about. We were a bit perplexed from the requirements and the technical risks they can pose, and then you're always told: "But we already committed to the client".

You are not the bad guy, you are doing your job: You're raising risks before you fail to meet your client needs. It is possible that if you go to the client and say "Listen, we can't finish everything on time" your client will say "Well, actually I only need A, B and C, right now".

Raise your heads above the water and talk to your manager honestly.

Working endlessly will not help.

I've been at both the receiving end (as engineer working on a project) and on the giving end (person responsible for project delivery). Although it's easy to blame the project manager or the lack of planning, the reality is that there are simply too many factors that go into a project's timeline and delivery. In my experience work is lighter during the initial phases of the project, and things pick up towards the end. If you are seeing the workload increase to 50 or even 60 hours a week for a few weeks (say, 4 to 5 weeks) at a stretch especially during key phases of the project, then I'd consider that to be somewhat expected. You might want to keep your direct manager informed about this and take comp days later on. Having said that, if these crazy work weeks extend for an indefinite amount of time, that's certainly cause for concern and you have every right to

Not the answer you're looking for? Browse other questions tagged professionalism software-industry work-time .

14
I am leaving soon for a new opportunity. Should I mention my co-worker's deficiency to our manager as I leave?
5
Is it wrong to refuse to work a shift I don't feel comfortable working those hours?
6
Should I speak up if I feel like my team is coasting our project?
41
Potential new partner angry about first collaboration - how to answer email to close up this encounter in a graceful manner
8
How to avoid accusations of “overwork” when employees who work extra hours are promoted faster?