How to include Competition Results on Resume

I just had a question as to how best to integrate competition winnings into a resume. I recently attended the AIAA Design Build Fly competition while also working on the SAE Aerodesign East Competition and received the following awards:

I'm trying to think how to best display my accomplishments without listing them all out but at the same time not diminish my achievements.

Below is a section of my resume where I think it should go. All comments and criticisms appreciated. 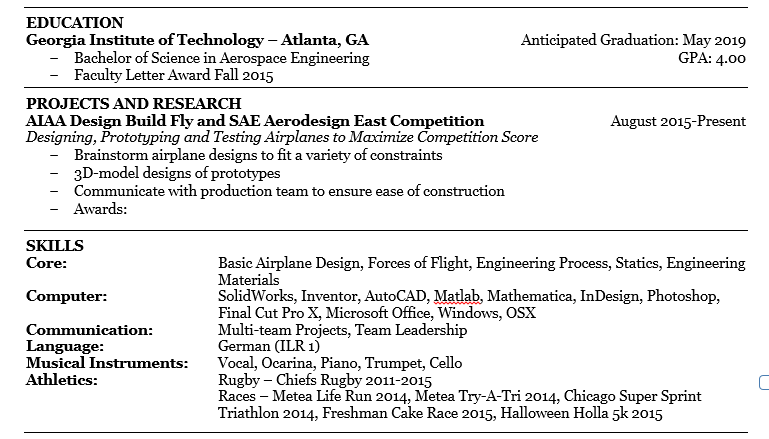 If these competitions involved significant amounts of work and challenge they merit inclusion on your resume with the amount of detail you give in your example. Conversely, if they weren't that involving you shouldn't dedicate more than one or two phrases to them and you could move it to an Accomplishments or Awards section instead.

In your case the suggested format is good, but as presumably suspect listing all the individual awards is overkill. I'd suggest using something like this:

It's key to highlight that it was a team competition but you want to avoid repeating yourself or mentioning things that are assumed, like the fact that teamwork and communication was involved.

The simplest solution is to just make a section called "Honors and Awards" and list it there.

Not the answer you're looking for? Browse other questions tagged resume .