I have a bumper sticker on my vehicle that says

My employer has told me to remove the sticker or face disciplinary action. They also said there have been two complaints received within the year. The car is a personal vehicle and is not used for any type of company business. The vehicle is parked on company property (their parking lot that all employees use).

I live and work in the United States. Would this be considered a freedom-of-speech issue or does the company have the right to ask/tell me to remove the sticker?

Update: Regarding some of the answers and comments; I was not intending to walk away from my job over a bumper sticker. The sticker can be bought here and has a large following here and has a community known as "a drinking organization with a charity problem".

A better question might have been related to professionalism of the sticker and if it was such a big issue that my employer needed to be worried about it?

professionalism management work-environment united-states
Share
Improve this question
edited May 31 '16 at 19:14
Skooba
asked May 21 '16 at 12:34

You absolutely have the right to have that bumper sticker on your car1. Your employer also has the right to fire you for keeping it there.

I'd suggest removing the sticker. Feel free to ignore this advice if you prefer being an uncompromising boor over being employed.

As for freedom of speech, consider reading up on what those laws actually mean. Alternatively, check out xkcd:

I can't remember where I heard this, but someone once said that defending a position by citing free speech is sort of the ultimate concession; you're saying that the most compelling thing you can say for your position is that it's not literally illegal to express.

Life is short, pick the right battles. Let's assume that the employer is wrong, and look at some of the consequences of your "victory" in this battle:

If you consider all this trouble worth the "privilege" of displaying your beloved bumper sticker in the company parking lot, you could certainly push your case. I find the return on investment and the reward to risk ratio very low here.

However, remember this was based on our initial assumption that your employer is wrong. As other answers have pointed out, your company most certainly has the right to place reasonable restrictions on how employees use their parking lot. Depending on the local laws, a strong case could be made if the bumper sticker involved anything explictly "protected" by freedom of speech (such as religious texts or symbols), but it is hard to see that apply here.

I was in a DC airport around 2010 when I overheard a conversation:

"We needed to let some people go. So Bob^* went through the parking lot to see which cars had Obama bumper stickers. They wanted change, they got change."

(the guy was obviously saying this to impress the woman he was with. edit it appears he was actually basing his story on an urban legend.)

I looked up the relevant laws - and there is absolutely no law violated in firing people based on the political opinion expressed in bumper stickers. In fact I found a specific example of a socialist being fired for his political beliefs by a government contractor. In the US, you can absolutely fire someone for their political opinions, sexual preference, etc UNLESS there is a law explicitly prohibiting it.

Freedom of speech is a great US principle, but the Constitution prohibits Congress from taking actions to take away freedom of speech (and courts have extended this to any government). This does not apply to private business. So if your employer is a government agency, you're safe (in the case above the socialist would have been safe if he were a government employee). Otherwise you've got no right to it.

But specifically: you can absolutely be fired for having a bumper sticker, and they are under no obligation to even give you a chance to take it off first.

*not the actual name

The way I see it.

Either you double down. 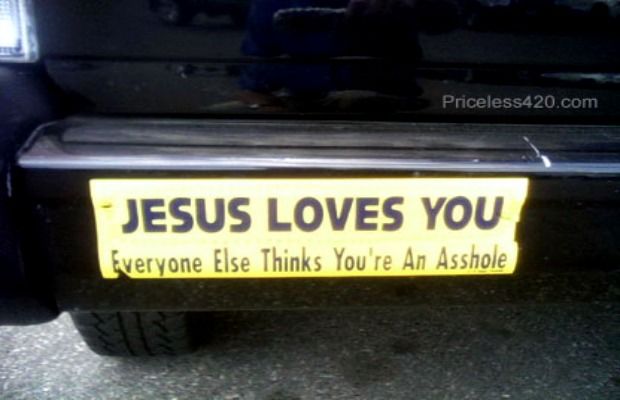 You take the passive aggressive approach. 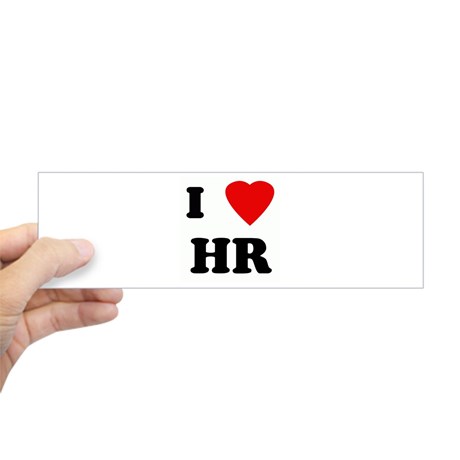 Or my favorite, because you actually want to keep your job, you capitulate. 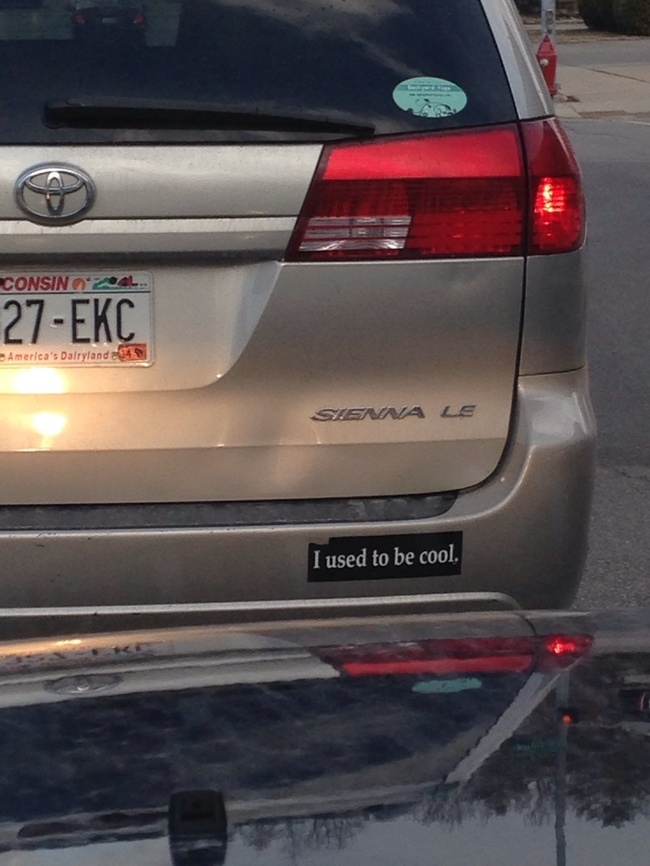 Also I suppose, you could just alter your bumper sticker to say:

"Polite as Janet from HR wants me to be"

Or "Polite as [====]" with some cheap tape covering the offensive word.

The fact that you used the "spoiler tag" in your post to hide the content of your bumper sticker already says that you think it is (or might be considered) inappropriate.

Whether your employer has the right or not of forbidding this kind of stickers is, IMHO, not the point. The point is whether you want to be a nice employee or you want to be pointed out as the one who picks fights at every opportunity.

Can you park your car backwards so the bumper sticker is not as visible? I mean enter the parking space in reverse, with the boot/trunk/exhaust-end first so that people walking/driving past see the front/hood/bonnet/grille end of your car only.

Similar to covering a tattoo or a piercing on request.

They can instruct you to remove the sticker as a condition of you using their car park. If your car never went into the car park it would of course be none of their business, but since it does they can impose any conditions they like on you for the privilege of using their car park. One of them is that you remove your offensive sticker.

Of course there is the other matter as to whether it is a good idea to take a stand on this (it isn't) but an answer to the simple legal question of whether they have the right to tell you to remove it is that they do.

Whether or not this is a violation of your rights is up to a lawyer's arguments and a court's decision. We are not qualified to make an assessment as to whether your rights are being violated.

Businesses are prohibited from treating people differently based upon protected classes (race, sex, etc.). "Obscene" is not a protected class. It is common for employers to have policies that limit the things you can say while working and/or while on company property (such as forbidding the use of profanity either verbally or on clothing, accessories, etc.). There is an established business need for it. Can you imagine going to a restaurant where the server walked up and said, "Are you ready to order yet, you f*&$!&@ a$@*)!#" and nothing could be done because he/she was exercising their freedom of speech (yes, there was a novelty restaurant chain that did stuff like this, but I haven't seen them around in a while)? What if the cashier at the electronics store told everyone at checkout, "Everything here is overpriced. You can get it cheaper down the street at Mediocre Buy." What if the guy in the cubicle next to you plastered the walls with something you found extremely offensive (like something attacking your significant other, parents, children, etc.)? You can just close your eyes when you walk by, right?

Any legitimate business probably also has a legitimate need to impose some limitations on what can and can't be said in/around company property, whether it is to protect secrets, protect themselves from lawsuits, or simply prevent their managers from being inundated with complaints. The bottom line is, if you are causing a disturbance in the workplace, expect them to ask you to stop. The purpose of a for-profit business is to make profit, not give employees a venue for self-expression. It isn't that they are trying to be controlling (usually) or that they really care, but mitigating complaints also distracts from doing more meaningful things (like running the business).

The car is yours, and you can do with it what you want, but the parking lot is theirs.

Obviously, someone out there doesn't like your sticker, and has complained to the company. The company has decided that they don't like the sticker either and they want it off their parking lot (the reason doesn't matter).

It's the same thing as a dress code, funny t-shirts, hats, or desk calendars. It's your right to own them, but it's there right to not have them at the company.

My advise, remove the sticker, or cover it up. It's just not worth it.

What makes you think it's OK to have your car continuously beaming out an F-Bomb on company premises all day long?

IMHO it's absolutely not OK to have a bumped sticker like that in the company car park. It brings disrepute to the company, and may likely offend visitors/customers - potentially turning them off using your company and thus harming its bottom line.

If you think your sticker is clever, it's not. And you're not going to make any friends with it in the wider community either. Grow up, wise up, and remove the sticker.

As several others have said, the short answer is, Yes, the company has a legal right to impose speech codes on its premises. I won't elaborate on that: it's been said.

So don't tell us now that you are surprised and distressed that people are offended.

This is not at all the same as someone having a political or religious bumper sticker. Someone who puts a "Vote for the Democrat" bumper sticker on his car is not normallly doing it with the deliberate intention of offending Republicans, or vice versa.

So forgetting the legal questions, just considering this as a people issue, this comes down to: The company has an employee -- you -- who is going out of his way to insult and offend other employees. They have two choices: Tell the offending employee to stop, or tell the offended employees that they have to put up with it.

In this case, if I was the boss, I'd probably say, Hey, if his bumper sticker offends you, ignore it. Nobody's forcing you to read his bumper sticker. It's not in your face. But I have no problem comprehending the boss's position.

Not the answer you're looking for? Browse other questions tagged professionalism management work-environment united-states .

18
How do I deal with an offensive joke from someone in upper management?

18
How do I deal with an offensive joke from someone in upper management?
14
Returning a favor for the boss
23
Should I adopt an alias when I have a name that may sound strange or offensive in the local language?
59
Someone peeled an American flag sticker off of my truck. What do I do?
186
Coworker throwing cigarettes out of a car, I criticized it and now HR is involved
11
Religious leader won't even consider hiring a white man. How can I change this potentially illegal attitude, yet still encourage diversity?
12
Use of malfunctioning company car
6
Is it okay to write non-offensive humor into meeting minutes?
4
Employee Complaints of “Micromanaging” about New Manager