The executive I report up to (my boss's boss's boss) is a very eccentric and awkward individual. He is a very polarizing figure, but most people I talk to are weirded out by him.

Here are a few examples of things he's done in the last week:

In other circumstances, I'd just ignore his eccentricities or laugh it off. But for better or worse, he thinks I'm the best employee in his organization and always tells other people about it. He speaks about how he is my mentor and how I am just a younger version of him. I'm fearful that people are going to start associating the two of us together.

For example, there was one town hall he was speaking at. Before his turn, he sat in the front row munching loudly on a family sized bag of Cheetos. When it was his turn to speak, he stood up in front of everybody with a heavy layer of Cheeto dust all over his hands and face and spent the next 10 minutes talking about an award I won and how I am his protege. I got strange looks the whole day.

How should I deal with this? I don't want to quit, because I really enjoy my job and my team. But I'm getting tired of dealing with the extra attention he's giving me. Should I try to distance myself from him? Or should I just keep the course and hope this ends up doing more good for me than harm?

I would ignore him and invest in headphones -- in other words distance yourself and be unavailable.

If he directly speaks to you say "I am really busy and need to get back to work."

If you keep this up (the ignore/I am too busy) he eventually will find someone else to fixate on or someone higher up will notice and take care of it.

I would just ignore it. Next month somebody else will be the flavour of the month.

Having said that, if it is affecting your work perhaps have a quiet word with your manager

Based on your list of odd behaviors, I would say person has a personality disorder. It sounds relatively harmless.

First, do not attempt to distance yourself from him by badmouthing him or making specific references to him in your discussions with others. They already know he a funny nut, no need to keep that part going.

Second, (and this comes from my "I don't care what people think of me" side) if someone does try to put you in the same box as him, push back. Tell them you are your own person and there's no need to try to label either you or your boss.

Third, realize that your boss will probably never change. His abilities as a manager in your field outweigh his odd behaviors. He has his position for a REASON.

Fourth, stress with him the importance that you aren't singled out as his favorite. He may be doing these "praising" sessions to impress or align himself as your friend. Be direct.

It's almost like it's The Office, and he is Michael...and you are Pam. (cultural reference: American comedy show about workplace which was hugely popular a few years back) 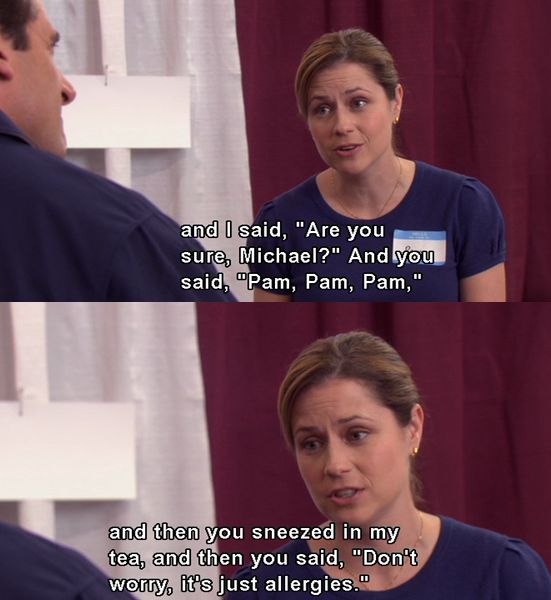 In The Office, Michael (the boss) was into Pam but she was into Jim and Jim and Pam were a couple. So Michael tried his best to leave them alone, but him being him, could not help but make all sorts of awkward, clumsy moves on her.

What did Pam do? Distanced herself as much as possible, created that boundary of strictly business and enforced it tirelessly (Jim helped). I suggest you do the same, a find a Jim to help...it may take a team effort.

Be polite but firm and consistent, and don't be afraid to say at least once something to the effect of "By the way, I just wanted to tell you that I didn't appreciate when you referred to me as your protege (or whatever), because actually that's not how I think of myself, I hope you can respect this. I really appreciate your understanding and thank you in advance." Or don't say anything, but try to communicate the same message in some less overt way...and hope for the best. Your call.

Be ready for the possibility of your pushback backfiring in some way. But time is on your side. Wait it out a bit, and hopefully soon enough he will reorient his attention onto something/one else. If you are lucky and if he has any common sense he will get the point and simply move on...soon enough. Good luck! And do check out The Office...it's hilarious. And so, so true...apparently ;)

Regardless of what he says about you I can't imagine many people in your organization think you behave this way or have very much in common with him.

There's no need to do or say anything to anyone to clear your name.

Unless you think he's engaging in some form of harassment, there isn't much you can do to change the behavior of your boss's boss. He's made it this far in life not recognizing social norms or any other feedback on his misbehavior. Just keep your boss happy and things should workout.

25
How do I decide how much to charge my boss for a painting?
88
Lost my temper with an underperforming employee and he quit
41
How to deal with upper management that's taking advantage of an excellent hire?
1
As a new teamlead, how to bring a subordinate's misconducts to attention of your manager
80
How to respond to your boss's email about a coworker's accusation?
3
Dealing with aggressive complaints by the head of different department in our company
3
How to deal with a Co-worker with performance issues
4
Getting new boss with no experience in the field