Purse stolen during fair - who is to blame? [closed]

Want to improve this question? Update the question so it can be answered with facts and citations by editing this post.

We are a small company with the main focus on eCommerce. Sometimes we are also present at fairs to sell our products. Our stand is always pretty simple: It's just a row of tables (11m long, 0.6m deep - the rest is not relevant for this question). The main till is on a table within the stand, as depicted here (sorry for my bad drawing skills): 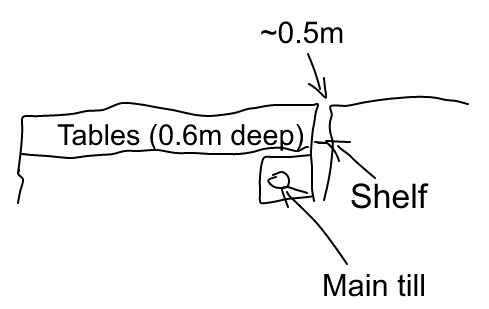 There's a 0.5m space between our and the neighbour's stand, "sealed" by a shelf standing about 0.5m deep.

There are 4 of us and we all have purses so we don't have to run back and forth to the main till. One employee went on a break and left her purse right beside the main till. When she came back she noticed that it was gone with all the 2500-3000€ in it.

Now what is an appropriate reaction to this? Me and another colleague are the owners of the stand and therefore the employers, but we have very different perspectives on that issue. His points are:

But I don't agree at all.

Now my colleague wants the employee to work a certain amount of overtime for free to make up for the loss, which I think is pretty pointless, absurd and inappropriate. She did not do it on purpose, she did not act carelessly (in my opinion, in his opinion "there would have been way better places to put the purse") and he (or anyone of us) could have put it away himself if he considered it so much of a concern. So there's either nobody to blame or all of us.

How should we handle this? Is it really appropriate to blame the employee and expect her to work overtime for free? Or should we just take it as a lesson for the next time?

Is it really appropriate to blame the employee and expect her to work overtime for free?

It's not only inappropriate, it's probably illegal, at least it is in the United States. Given that Europe's employment laws are even more employee biased, I'd be shocked it if were legal there either. If an employee works, you pay them for their work. You don't get to demand that they work for free. Ever.

Accidents happen. Mistakes happen. But you can't rectify mistakes by making a person work for free. That's called slavery, or at best indentured servitude. Just don't do it.

Somebody has to be held responsible for this

Certainly. The persons managing the stand are typically considered responsible for everything that goes wrong, and it sounds like that's you and your colleague. That's how management works: the people at the top bear ultimate responsibility.

How should we handle this?

Report the theft if you haven't already. Apologise to the employee on behalf of your colleague if he lost his cool when talking to her. Revisit your policies for handling and storing cash. That's it. As you've said, consider it a lesson for the next event.

I could even say that you should be grateful to the employee whose purse was stolen. If that easy target hadn't have been there whoever stole it might have ran off with your main till instead. If your colleague is a loon and not really listening to reasonable arguments, this one may convince him.

Is it really appropriate to blame the employee and expect her to work overtime for free?

No. It's inappropriate, it's unethical and it's most likely illegal. A workplace theft is a business expense and you should never pass those off on your employees.

In most European countries an employee cannot be held responsible for business expenses or unintentional losses. Even in the US certain states like California have introduced legislation that prohibits an employer from charging business expenses to an employee. You'd have to check your local laws to know what is and isn't possible but all you need to know is that you shouldn't be asking the employee to cover this loss in any way.

The only one responsible for the theft is the thief. But who should take the heat here?

If there are protocols in place on how to handle these purses and the employee broke those protocols, then she can be hold accountable but the accountability will never hold in court in terms of money being payed back by the person who did the mistake. The only thing she should lose is accountability with appropriate consequences, but that should never include payments of any sorts.

I'm assuming that there were no protocols in place, i.e. maximum amount allowed to be kept in a purse at each time, where are the purses meant to be stored at each time, etc. If they're not in place, it's simply the company's fault entirely if something goes wrong. Sure, the blame can be put on whoever was responsible for keeping the money safe but shit happens, especially without proper protocols.

Sure, this employee could have been more careful and there appears to be a lack of judgement going on, but the only one taking the heat should be the company, unless there truly were protocols in place that were broken. Then it's on the person that broke the protocol, even then it will never result in the employee paying anything, unless that person was behind the theft but then it's up to court to decide the penalty.

Make sure to check if the company is insured for thefts like this. Notify the theft to authorities, such as the police and possibly the management of the event.

This employee doesn't owe the company anything, however it is understandable that a certain level of trust was broken and it's up to the managers to decide which level of trust can be placed on that person again, but in no way can the company demand anything from this person for screwing up, in terms of money, not even abduction from future paychecks. First of all you simply can't and second of all, imagine which kind of people would be willing to work for a company that would put them through that in case of an incident like this.

It's up to the company to apply protocols that prevent things like this occurring in the first place, and once something bad happens (even when protocol has been broken) it's the company that needs to pay. If protocols were broken then management needs to decide which level of trust can be put on that person (perhaps none) but that's about it. Be careful playing a blaming game here, chances are that scolding is not going to help the situation, if anything it can ruin the morale of the team.

You have to look at this in the abstract. If you feel the employee was truly negligent in handling company resources, then you can discipline them on that basis. It doesn't matter what they were handling or the value.

You would have to prove a very high level of negligence, in the US at least, to get the employee to actually pay for the loss. Leaving the money next to the other money would sound perfectly reasonable to most people.

Not the answer you're looking for? Browse other questions tagged germany overtime discipline .

9
Overtime as the only hourly worker on team
100
Trainee is being dishonest on her first day
51
Manager wants to completely avoid any overtime work. How can I adapt to this change?
138
Manager strongly suggests that I do more unpaid overtime during performance review
5
How to handle hourly employee taking unauthorized overtime?
0
Adding time to learn in overtime
22
Can my employer fire me for notifying them of my unpaid overtime hours?