How to mention gaps in CV due to compulsory military service and test preparations?

Recently I have started writing my CV, but the problem is that there were two time gaps that I have to explain.

My idea is to put them under the category "Others" at the end of my CV, but I'm not sure if it is a good way to go. Therefore, I'd really appreciate it if someone could give me some suggestions.

I’m applying for jobs in Germany. They used to have compulsory military service as well, but not anymore. I’ve also asked the Germans I know, but most of them didn’t have such experience, so there is very little they could help.

CVs in Germany are a "(tabellarischer) Lebenslauf".

The Lebenslauf in Germany are quite different from anglophone countries, they always include a current photo (don't need to say that you must give a good impression), your complete address data, your birth data (location and birthday), your marital status and your hobbies and interests. I only give this as background information, there are tons of information about that, so I only answer the actual question.

The chronology of your lifetime must be chronologically ordered (both from first to last and last to first are known, the last to first is more modern because it gives the important information at once), complete and without gaps, so you need to add military service to your CV. 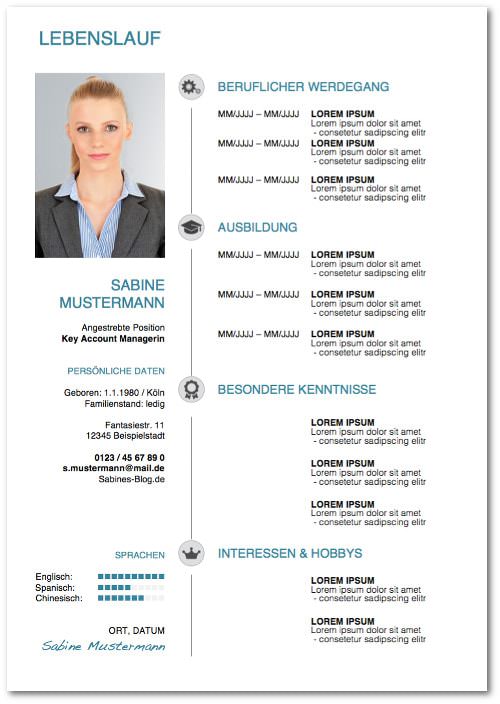 It depends on your age how it is build, if you are a beginner, you can also include the primary school (to fill space), but if you are older, you only mention the highest achieved school grade and your end of your education (master, PhD, master craftsman). But it does not matter if you had military service, if you were jobless (especially then), if you were nursing your sick mother or if you traveled the world, everything must be mentioned. The timeframe is given in months/year format, so as an example:

While there may be gaps, they should be explainable and not exceed 3 months. It is also not expected that you mention every small job (waiter, taking out newspapers, postal service), you can subsume that under "temporary work".

Military service itself has no stigma (especially if compulsory), it is seen like school/education, so there is no need to hide the fact.

ADDITION:
I strongly disagree to Konrad Rudolphs comment because I think he is a victim of confirmation bias. The most important thing for an application is that it is a fit, so the better your profile, the less important the form. If I need a position as bodyguard for a geological expedition and I get an application from a honorably discharged ex-marine with extensive combat experience and special training in conflict avoidance/diplomacy and camp preparement who also speaks several languages (including the local ones in the area of the expedition) and lived there for years, I don't care about the form anymore.

Differences in form are often accepted in international companies or in branches with extensive international cooperation (STEM fields). Another reason is if you have a highly sought profile. Let's see at Konrad's profile: scientist and developer, PhD, experience with high-throughput sequencing. I take a shot and say that's pretty rare.

If you are not in a firm which have the international experience, but you have a highly sought profile, do not think people do not notice that you ignore the cultural standards. Yes, it is not mentioned and you are still coveted, but people noticed and it costs you points. If you are not in demand, this attitude will defeat you. I also disagree with deviating from the standard or saying "This is not really necessary" as comments suggested. Until you really know what you are doing and what parts can be scrapped (e.g. a professional who works out an application for you or if you are a native with experience), stay as close to the gold standard as possible. Every deviation will be noticed and if there is much competition, it always works against you.

Treat your military service as a job and list it on your CV.

Since it's compulsory in your country, it won't be unexpected to see that on your CV.

If you need examples of how to list these roles, ask your friends/colleagues.

Native german here, who has a bit of hiring experience as well.

In Germany, we expect a CV to be without gaps. Any gaps will raise questions. In training courses for writing good CVs, we teach participants to fill any gaps with something. If you went on a tour around the world, write it there. If you were in hospital after a serious accident, or depressed at home after a divorce, invent something that's not entirely a lie (e.g. "professional reorientation"). But never, ever, have a gap in your CV.

In your specific case, both of these items are entirely fine to put on your CV just the way you put them in your question. List them with the time period and write them down without further details, e.g.:

or, the other popular format:

May 2014 to August 2014 - preparation for TOEFL certification

The "other" category near the end is usually reserved for activities without a fixed timespan, or that run parallel to your education and job history over a long period of time. Such as hobbies or volunteer activities, all of which you should list only if you think they are relevant somehow. But most employers like to see at least one or two items here so they understand you as a person. Or as one of my professors said: They want to know how you recharge your battery.

If you passed TOEFL successfully, definitely list it under your qualifications together with degrees and certifications.

Final remark: Military service in Germany does not have the same high status it has in many other countries. As such it is not typical to list your rank or other details in the CV. For specific jobs, this can be different, or if you know that the person reading the CVs would appreciate it, but that is rather rare.

In general, it seems to me good practice not to disclose in the CV any information that could be interpreted as grounds for discrimination. In my country (Israel), it's illegal for an employer to discriminate because of army service (which is compulsory), so it's also illegal to ask about it in an interview. If your country has similar laws, I would either list this period as just "Compulsory military service" without any further details, or leave it as a gap.

Not the answer you're looking for? Browse other questions tagged resume germany employment-gaps .

2
Uneployment gap at resume because of army: how to indicate that? Should I put army years to the software engineer's resume?

23
How could I explain a 2 year gap in obtaining a degree due to dropping out and then returning?
26
How to mention project names on CV where name can't be disclosed due to non-disclosure agreement
22
Implications of showing promotions on CV?
2
Unexplained gaps in my academics due to drop out. Hiring manager couldn't find it and has offered the job already
1
Can and how to mention an unsuccessful patent application in resume
39
Friend got overpaid but doesn’t report it - is it my obligation to report it?
4
How to correct wrong roles of past and gaps on cv
4
CV Question regarding languages and military service
4
Starting a career in psychology (talent development and creativity) without any internships or other job experience